Local volunteer joins the fight to save endangered turtles 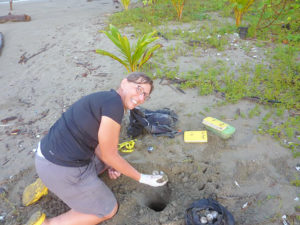 A MELKSHAM resident has returned from a month long trip in Costa Rica, volunteering for a turtle conservation project.

Work involved locating turtle eggs buried in the sand and moving them to a safe location to protect them from poachers and predators.

“We were moving the eggs to try and increase the chances of more turtles reaching adulthood,” Davina explained to Melksham News. “Of the hatchlings that hatch and go back to the sea, only one in a 1,000 makes it to adulthood to reproduce – they are not sexually mature until they are 25 years old.

“As it was towards the end of the season, we moved the eggs to a safe place rather than the project’s hatchery as there would be no-one there to assist them when they hatched. Poaching is still a problem – poachers use the turtle tracks to locate the nest and steal the eggs – so by moving them, hopefully these eggs have a better chance.”

As part of her volunteer work, Davina also helped to monitor the hatchery, which contained eggs that had been relocated before her arrival. “The first time I saw the eggs hatching I was awestruck” said Davina. “It’s an amazing sight to see! When they hatched we would collect them and release them about four metres from the sea, roughly in the same place where they were collected.”

Other work involved clearing driftwood from the beach to help improve access to and from the beach for the turtles and clearing the beach of plastic waste. Davina said, “Plastic – there was loads and loads of it – mostly little tiny pieces which could easily be eaten by all manner of living creatures.

“There were large items – bottles, large pieces of plastic obviously from a much larger product. What struck me though were the number of toothbrushes and cottonbud sticks all over the beach, not to mention Crocs shoes and flip flops. We did beach clear-ups, but it didn’t seem to make much difference as the plastic just kept coming in with each tide.”

About the inspiration behind her trip, Davina explained, “I retired nearly a year ago and I read a book called ‘Quiet’ by Susan Cain. She had three questions to help you decide what you wanted to do in the future – one was, ‘who do you envy?’, and I realised that not for what they do, but what they see, I envy wildlife photographers and presenters.

“So I set myself the goal of seeing more wildlife –  I am awestruck by seeing things. When I first saw the turtles come out of the ground I was overwhelmed with wonder!

“I haven’t decided yet what I am doing next, but I am considering trips to Laos to an elephant project and maybe a trip to Borneo to help with  the orangutans.”

Summing up her experience in Costa Rica, Davina said, “It was fab, absolutely fab, having the privilege of seeing turtles in such close proximity – wildlife that has survived for at least 25 years to become sexually mature, laying eggs in front of you – it’s such a privilege.

“I think I contributed to the release of 2,000 to 3,000 hatchings – so that’s two or three turtles reaching adulthood, and hopefully at least one of them is a female that comes back to lay eggs. I feel quite privileged by that – helping the survival of a vulnerable species, it puts life in perspective. I walked around with a smile on my face the whole time – I never got bored of seeing the turtles.”

Now back in Melksham, Davina is hoping to raise money and awareness for the charity Turtle Trax, by offering her services as a guest speaker. Davina said, “For a fee I’m happy to be a speaker and tell people more about my experience. The project needs more money, it is run on a shoestring budget.” To contact Davina about being a guest speaker, email: drvinag @gmail.com