Vote for Melksham’s Person of the Year 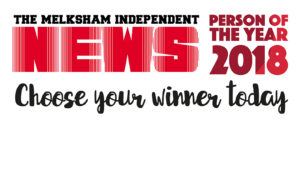 THE nominees for Melksham News’ Person of the Year 2018 competition have been shortlisted, and now readers are being asked to cast their vote on who they think should be crowned the winner. In our last issue, Melksham News asked readers to nominate their ‘Person of the Year’ – somebody in the town who deserves recognition for their outstanding actions over the past year or who has had the biggest impact on life in the town. Below is the shortlist. You can vote on our website – www.melkshamnews.com; by emailing your choice to news@melkshamnews.co.uk (please include your own name and address) or by filling out the form on page 5 and returning it to Melksham News, 31 Market Place, Melksham. SN12 6ES The deadline for voting is 3pm on Wednesday 23rd January.

In his first year as manager of Melksham Town FC, Kieran saw huge success with the club winning promotion into the Southern League – the highest level of football the club has ever played at. The team also made history by reaching the quarter-finals of the FA Vase – attracting record crowds. At his gym, CrossFit Civitas, in Melksham, Kieran organised a number of fundraisers raising money for charities that support multiple sclerosis, epilepsy, bowel cancer, and Great Ormond Street Hospital.

His nomination said, “Melksham Town went through the whole of 2018 without losing a single home league game, which shows how important his impact has been to local football and the town. This has been made all the more impressive with it being his first ever year as manager.”

After the premature birth of her granddaughter five years ago, Stevie was inspired to start making layettes – packs consisting of clothing, hats, a nappy, teddy bear and blanket –  for newborn babies too small to wear regular clothing.

Stevie donates her work to hospitals and charities across the country and is kept so busy she has created her own ‘craft room’ at her home in Berryfield. She has also expanded her work to create twiddlemuffs for dementia patients – a knitted muff with items attached that patients can play with to keep themselves occupied.

Her nomination said, “This wonderful  lady works tirelessly and selflessly to help others at her own expense and devotes so much time despite her own health battles. I think she is truly amazing.”

Owners of the White Hart in Atworth, Nathan and Kirsty are celebrating 10 years behind the bar this month. Since taking over, the pub has become a community hub for the village, and the couple have hosted a whole host of charity events, raising nearly £42,000 for  local organisations, groups and charities. Events included an annual music festival and the monthly village get-togethers – an opportunity for the community of Atworth to come together and socialise.

Their nomination said, “They are well on their way to raising £42,000 for local charities and in an era when communities struggle with the loss of pubs, Kirsty and Nathan go above and beyond to keep theirs alive.”

In 2014, Luke was involved in a head-on collision with a truck, sustaining a traumatic brain injury, leaving him in a coma for six months.

Four years later, in August last year, Luke defied the doctors who told him that he may never walk again and took part in Melksham’s 5km parkrun, raising over £1,300 for the Air Ambulance who he credits with saving his life.

His nomination said, “Luke is the nicest person you will ever meet! His fantastic smile, cheeky personality and sheer gumption makes me so proud to know him. He never gives up and deserves this award for the grit and determination shown to overcome his injuries.”

This year Darren will be celebrating 35 years with the 2385 (Melksham) Squadron Air Training Corps. He first joined the squadron as a cadet, before rising through the ranks to join the staff as officer commanding of the Melksham squadron and then becoming a squadron leader. He retired from his squadron leader role in 2013, but continued as a civilian instructor, helping to train Melksham’s new young cadets.

His nomination said, “Darren probably spends more time with his cadets than he does at home! He is there every Wednesday and Friday evening and is always taking them out in his free time for exercises and orienteering trips. He never stops giving!

“He’s helped a huge amount of young people who have passed through the squadron, helping them learn vital life skills – he’s given so much of his time to the squadron over the years.”

In 2018, 12-year old Ciaran continued with his efforts raising money for charity, raising over £1,000 for the Teenage Cancer Trust by shaving his head, alongside his father Jason. In three years, Ciaran has raised over £2,200 for various charities. He was also named ‘Young Fund-raiser of the Year’ by the MS Society for his swimming challenge in 2017 and received an award at the Melksham Young People Awards.

His nomination said, “In all of the challenges he has completed, Ciaran has always been very selfless in his missions, always thinking and wanting to help others before himself, a true shining example of the younger generation and a great model for his peers.”

Her nomination said, “Nobody could care more about Melksham than she does. By nominating her it gives me a chance to thank her for all she does for our beloved town.  Without Kathy Melksham in Bloom wouldn’t be the same! Kathy is a lovely person and has one of the best personalities, we are lucky to have Kathy in our community.”

Luke opened Whitley’s village shop and post office, The Toast Office, in September 2017, realising his vision for a community hub for the village. Since opening, Luke’s store has become a popular place for the community and local groups to meet. Last year, Luke organised a Christmas lights switch-on for the village, which attracted over 200 visitors.

His nomination said, “What he has done for Whitley and the surrounding area deserves a huge reward. He has given the village a hub, meeting point, a post office that doesn’t close for lunch, jobs for several people, and a service with a smile. We have lived here for over 10 years and the village has never been the same as it is now and that is down to Luke.”

Sue hit the headlines late last year when she launched a campaign to save the Melksham Lunch Club after it was closed down by Wiltshire Council. She is also well known in the town for a whole host of other projects including her role with the local walking netball team, the PSG choir, her fundraising events for individuals and groups, her role as a respite carer for foster children, helping children at the library in the summer with reading, and her annual participation in the Melksham Carnival.

Her nomination said, “Sue always seems to have some activity under way for the benefit of an individual or the town. As they say if you want something done ask a busy woman – Sue gets things done in a quiet, cheerful manner, is always ready to listen and help where she can.”

Teresa has been nominated for her involvement in a number of volunteer groups in the town, as well as the support she offers to groups to help generate funds or raise their profile. She volunteers for the Melksham Brownies and Guides, is a trustee for local charity Young Melksham, and previously ran a school gardening club at Aloeric School. She is also clerk for Melksham Without Parish Council.

Her nomination said, “I’m not really sure where to start with regard to all the groups and organisations that she has been involved in, tirelessly volunteered for or given her advice and time to, as there are just so many. I think most people in Melksham who know her would agree that she really is the ‘go to’ person if you want information or need to know anything about groups, organisations and what is going on in our town and the surrounding villages.”

Retired teacher Adrienne is the current mayor of Melksham. She volunteers as the chair of Melksham’s River and Food Festival, which last year attracted thousands of visitors to the town. She also volunteers for Melksham in Bloom and town tidy days.

Her nomination said, “I am nominating her as she has been a committed volunteer in the town for the past twenty years. You just need to read each copy of the Melksham News to see how much she contributes to our town as she can often be found multiple times in each issue. She has been instrumental in pushing forward the development of Melksham’s parks and open spaces. And as mayor visits countless schools, older people’s homes and generally represents our town at local and regional events, all on a voluntary basis and to help improve our town for all who live, work and visit here.”

83 Responses to Vote for Melksham’s Person of the Year