Bowerhill residents in dismay as trees chopped down for housing development 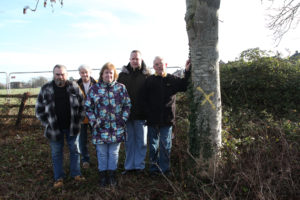 A GROUP of Bowerhill residents have expressed their disappointment and anger at the number of trees that are being taken down to make way for a new housing development.

Housing developers Taylor Wimpey began work early this year to build 213 homes on land on Pathfinder Way on the land between Bowerhill and Melksham. As part of the initial works, a number of trees and hedgerows have been removed along one side of Pathfinder Way. Trees on the other side of the road are also currently being removed.

Local resident Kevin Allsop told Melksham News, “It’s disgusting! Some of these trees are huge, they have taken years to grow to maturity and now they are being chopped down. I’ve approached our local Wiltshire councillor, Roy While, for support, but he said that Taylor Wimpey has been given the go-ahead to proceed, so nothing can be done.

“Lots of people are in dismay about this – but we need to speak out. It’s very short-sighted of Wiltshire Council to allow this to happen – yes more trees are going to be planted in their place, but young plants will take years to replace the ones that have been removed. There should be a rule that if a tree is over so many years old that it is not allowed to be taken down.”

A spokesperson for Taylor Wimpey Bristol comments, “The work currently being undertaken is a requirement of the approved highway improvement work and planning permission for delivery of the new homes, all of which has been carefully considered and agreed by many parties over recent years.

“As part of the plans, approved landscaping for the new homes and public open space will deliver in excess of 200 new trees, providing an enhanced environment for the local community and wildlife.”

Pictured: Bowerhill residents Kevin Allsop, Kathy Allsop, Alan Smith, Andrew Allsop and John Spirit on Pathfinder Way with the cleared side of the road behind them.