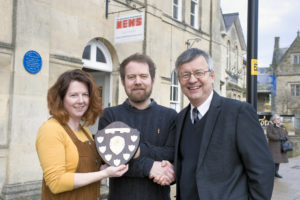 MELKSHAM’S Person of the Year 2018 award has been won by Nathan and Kirsty Cortilla who own the White Hart pub in Atworth.

Hundreds of votes were received in the competition, which was organised by Melksham News to find the person who has made a real contribution to the community in 2018.

This year Nathan and Kirsty are celebrating 10 years behind the bar at the White Hart. Since taking over, the pub has become a community hub for the village and the couple have hosted a whole host of charity events, raising nearly £42,000 for  local organisations, groups and charities.

“We are humbled, overwhelmed,” Nathan and Kirtsy told Melksham News. “It was very unexpected. There were a great range of people nominated who do so many amazing things – so to have first been nominated and then win – it doesn’t feel real! Well done to everyone else who was nominated – everyone is a winner!

“The comments we have seen about us both have been lovely. This has given us the confidence and the push to carry on doing what we are doing and to keep beating our targets. It’s inspired us to do bigger events for the village and more fundraising.”

Some of Nathan and Kirsty’s supporters said, “They have done so much for both charities and also the community spirit of the village and have created a community pub which goes beyond a good business.”

“It’s so hard to not only maintain a pub but even harder to make it a hub of the village and raise a substantial amount of money for various charities in so many different ways. They are always striving to think of new ideas, all of this achieved with a young family to look after, hats off to them they deserve this reward.”

“They are both amazing and run our lovely village pub, raising money for local charities at many events during the year.”

“Their pub is fantastic, everything a community pub should be, and the way they support local charities and organisations is exceptional.”

Ian Drew, editor of Melksham News, presented the winner’s shield to Nathan and Kirsty last week. Ian said, “Congratulations to Nathan and Kirsty for winning Melksham’s Person of the Year 2018. Nathan and Kirsty have made a huge contribution to Atworth in the 10 years they have running the White Hart, and they truly deserve to win this award. The messages we received from voters highlighted the huge impact they have had on the village, creating a community hub for everyone to enjoy.

“All this year’s nominees were worthy of the award and deserve praise for their efforts and contributions to the town. They can all feel proud to have been involved and to know they have made such a big impact on local people’s lives.”