Lunch is served! Community meals return to the Assembly Hall 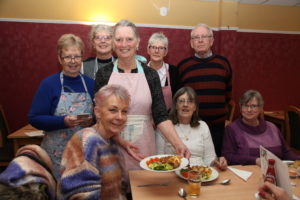 THE launch of Melksham Community Meals at the Assembly Hall has been described as ‘a huge success’ by the organisers.

The service launched last week on Friday and Sunday, attracting a total of 68 people across the two sittings. The new service replaces the Melksham Lunch Club, which was axed by Wiltshire Council in December last year  after they announced it was not financially viable and was running at a loss of £82,000 a year.

Local woman and nominee for Melksham Person of the Year 2018, Sue Mortimer, who led the campaign to reinstall the service, told Melksham News, “It was a great turn out for the start of the Melksham Community Meals at The Assembly Hall on Friday 8th February and Sun 10th February – 30 people attended on Friday and 38 on Sunday.

“I was very pleased to recruit the original staff from the lunch club, Elvy Schofield and Sue Hutchinson, as their meals were always a winner with the customers. Thank you to the seven volunteers who helped out over the two days and a massive thank you to Alice (Elvy’s daughter) who is showing us the ropes.

“I was overwhelmed with the thanks people expressed to me  – they were all so grateful that the meals have been saved.”

At the launch last Friday, Melksham News spoke to former users of the Melksham Lunch Club, Penny Hills, Denise Willis and Sue and Trevor Lawes, to hear their thoughts on the new Melksham Community Meals service. They said, “We are very pleased that the service has come back – we’ve gone quite hungry the last six weeks!

“What Sue and the volunteers have done is brilliant, marvellous. When Sue gets her teeth into something there is no stopping her.

“We were at a loss when it closed – we were shocked, gutted, there was no warning. The service was used by lots of old people who live on their own – it was important for the town, so we are thrilled that it is back, long may it last. We are looking forward to some good social contact.”

Sue’s campaign to launch Melksham Community Meals – a service open to everyone in the community, offering a place for people to meet and socialise – attracted huge support from the town.

Sue said, “I want to thank Pat Cox for doing the snowy Melksham parkrun 5km route on Sunday 3rd February with me. We were entered/sponsored for the Bowerhill Bombers 5K but due to the snow it was cancelled. By running the Melksham parkrun instead, I still managed to run the 5km distance and collect my sponsorship money of £240, bringing the total raised for start-up costs with raffles, dance and quiz night to £910 in time for the opening of Melksham Community Meals.”