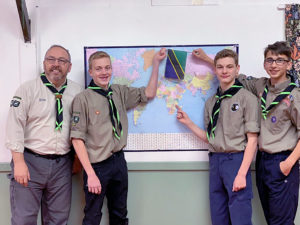 John Lister, Olly Saunders, Will King and Will Lister

They have been selected to be part of a four-week expedition organised by Hampshire Scouts in the summer of 2020, which will aim to complete four separate construction projects. The three boys from the 1st Broughton Gifford and Holt group will be helping to build teacher accommodation at a school in Madabadaba, in the southern uplands, near the town of Ifakara, while John will be helping to lead a project working on a new medical centre in Emau Hill, one day’s drive north from Dar es Salaam.

Leaders and Scouts all went through a challenging selection weekend in October, where their skills, attitude and teamwork were all put to the test and the Broughton Gifford applicants were thrilled that all of them were picked. “It was challenging, dealing with uncertainty and the pressure to perform,” says Will King (15) “but I was really happy when I found out I’d been selected.”

Each of them needs to raise around £3,500 between now and next summer, to pay for their expedition costs and to contribute towards the building costs of the projects themselves, so they will be fundraising in earnest.

“I’d like to try to do a 24-hour bike ride to raise money and to raise awareness of what we’re doing,” says Will Lister (14), whilst the fourth member of the team, Olly Saunders (15), has been building birdboxes and selling them and is also planning an endurance 60k kayak, cycle and run in the summer.

The whole team is excited about meeting the local people in Tanzania, working alongside them and experiencing their culture, food and living conditions.

“All of us at Broughton Gifford Scouts are very proud of our lads and the great impression they made on the expedition leadership team,” says John “We know they’ll rise to the challenge of working hard in such a different environment – it will be an amazing experience for us all.”

If you’d like to find out more about the expedition, the team’s fundraising plans, or if you think you can help them in any way, please get in touch at gsl@bghscouts.com. They would be grateful for any support.

Picture: John Lister, Olly Saunders, Will King and Will Lister.