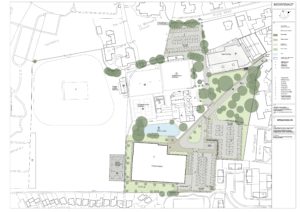 WILTSHIRE Council has announced that there will be a further four-month delay to the Melksham Campus project because of an in-house ‘battle’ between project leaders and the planning department.

However, the council says it is ‘still committed’ to building a campus in Melksham and that it ‘can afford’ to build it. And it has now unveiled plans for the campus and is aiming to submit a planning application next month. The council is now hoping to complete the project in 2021 which would be nine years behind its initial planned opening of 2012.

The project hit more controversy earlier this month when just two days before a Melksham Area Board meeting, members were told that there was likely to be an 18-month delay to the campus project and that planned works to build new tennis courts at the Melksham House site this year would not be taking place.

However, at the Area Board meeting on Wednesday 13th February, the deputy leader of Wiltshire Council, cllr John Thomson, blind-sided councillors with the news that the delay to the project was now four months – instead of 18 months – with an estimated completion date of mid-2021, and that the tennis courts would be built by this summer.

Cllr Thomson, blamed the campus delay on an in-house ‘battle’ at Wiltshire Council between project leaders and the planning department.

Cllr Thomson said that Wiltshire Council’s planning department had raised objections to the campus plans saying they could have a possible ‘negative impact’ on Melksham House, which is a listed building.

However, cllr Thomson said that the ‘battle’ had been won with the planning department and that the campus project would now be moving forward. He also offered reassurance that Wiltshire Council is ‘still committed’ to building a campus in Melksham and that they ‘can afford’ to build it.

After the meeting, chair of the Melksham Area Board, cllr Jon Hubbard, told Melksham News, “The news was significantly more positive at the meeting than we were expecting. So it is hopefully not as bad as we were led to believe. The impression I got before the meeting was that the campus would be opening in 2022. So to hear 2021 was very good news.

“There was a lot of table thumping at the meeting on Monday – they were surprised at how negative the councillors reacted to the news that the tennis courts were off the table. We expressed in no uncertain terms our annoyance about the non-provision of facilties that had already been promised.

“What happened? Maybe they woke up to the fact that Melksham Area Board councillors had lost all patience with them. I suspect – and I cannot be certain, I can only hypothesize – that because we gave them a hard time and made it very clear that they would get an even harder time at the meeting, the council reprioritised their workloads and made the campus a priority.”

Construction is now expected to start in early 2020, with completion estimated for mid-2021.

In December last year, Wiltshire Council said that campus plans were ‘still on track’. According to the timeline given in October 2017, construction was estimated to start in July this year, with completion in January 2021.

‘Going off-script’ at the Area Board meeting, cllr Thomson said, “I am equally annoyed about the delays on this project. The delays have been inflicted on me and Melksham by the planning process. The planners have been so unhelpful it has been unbelievable.

“But the conservation officers didn’t think that was right. They felt that had a negative effect on a listed building so they then insisted that we did the heritage assessment again, so that was another £8,000 we had to spend to provide that.

“They are also insisting that we link the planning application of the campus and what the future use of Melksham House is to guarantee that something happens to Melksham House, which we are now doing. And this has contributed totally to the delay.

“I have to say that I have had so many meetings and bumped the table and eventually I asked Jane Scott (leader of Wiltshire Council) to call a meeting in our office – all the parties in a room and locked in until a solution was formed – because it’s been bloody ridiculous, absolutely crazy and if I had my way we wouldn’t have any conservation officers, because it is just ludicrous.

“I can’t tell you how frustrating it has been, because it’s literally put us four months behind, for no reason at all.

“We are going to go ahead with the process, the money is there to build it and we have cracked the planning issue so we can get on with it. But it is unbelievable that people within the organisation are stopping us from delivering things that the community wants. Everybody in this community wants a campus, we want to build it, we want to keep Melksham House and make it useable – it’s either going to be used for offices, residential accommodation or a care home, which ever is best for the community.

“It’s been a total punch-up with the planning process. The battle has been won, to be honest, with the conservation officers and planning and I don’t forsee any further problems.”

A public information session about Melksham Campus will be held at Melksham Library on Tuesday 5th March and Wednesday 6th March, 12pm – 7pm.

About the confusion surrounding the campus delay announcement, a Wiltshire Council spokesperson said, “The dates shared at the area board are the exact same dates that were shared at the briefing with councillors, nothing has changed.

“At the briefing meeting we did discuss the best way to approach the construction of the courts, since some of the courts may be impacted by the Melksham House development proposals. It was agreed that any course of action would need to be discussed with the club, which has taken place.”