Fundraiser runs marathon against all odds 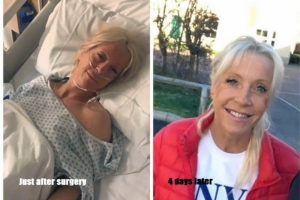 A Melksham woman ran her own charity marathon two days before major surgery to move a 3kg tumour.

Fitness-fanatic Tracy Steel doesn’t do things by halves. After finding out that she didn’t have a place in the 2019 London Marathon, she decided to run her own, despite being due to have major surgery on 24th January to remove a large abdominal tumour. She could either run the marathon before her operation or wait months until she had fully recovered. For Tracy, it was an easy decision. She set up a Facebook fundraising page and arranged to run the 26 miles six days later.

Tracy said, “You can let life stop you from doing things or just get on with it. I had set myself a goal to run a full marathon this year in aid of a charity that is close to my heart. I wasn’t going to let anything stop me. The Centre for ADHD and Autism Support has helped my family and many others through very difficult times. I wanted to give something back.”

Tracy invited friends to join her on the run. Her fellow fitness training partners, Chris Vick and Sue Davison, rose to the challenge. Friend, Mimi Elizabeth, cycled alongside, supplying the team with energy gels and water supplies. The route took the team from Bradford-on-Avon to Bath and back along the Kennet and Avon Canal and the River Avon. Despite cold, icy and rainy conditions, everyone completed the 26 miles and enjoyed laughs along the way.

Tracy raised £626 in the six days leading up to the event. She is now recovering well from her operation and planning her next big challenge — the Woburner Triathlon.