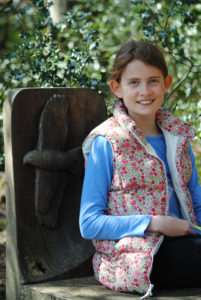 LOCAL charity, Evie’s Gift has marked its one year anniversary, having so far helped 100 families who have a child with life-threatening or life-limiting conditions.

Evie’s Gift was set up by the parents of 13-year old Evie Clover, Bryan and Patsy, after she died in January last year after being diagnosed with a brain tumour. The charity offers support to families whose children have been admitted to hospital.

Since the charity was established in March last year, they have spent over £8,500 on hotel accommodation for families needing to stay close to their child whilst in hospital; and over £14,900 on grants to help with food and travel costs. In addition to the 100 families they have helped so far, the charity also donated over £2,000 to three Ronald McDonald Homes to help pay for Christmas lunch for another 266 families. The charity will also be donating £10,000 towards brain cancer research.

Evie’s father and chairman of Evie’s Gift, Bryan, said, “Losing our beautiful daughter was the worst thing that could have happened to us, but we knew that she had spent her short life helping others so freely, that when we realised that a need existed, doing something about it was the obvious thing to do.

“Having someone take away some of the stress and pain when you are terrified about what’s happening to your child is so important.  One year on, we are now working closely with children’s wards in Bristol, Liverpool, Manchester and Glasgow.

“Thank you to everyone for their support over the last 12 months and the support that we hope they will continue to give in the coming years.”