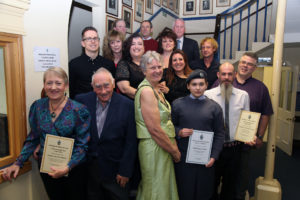 People and groups in the community who have gone the extra mile for Melksham were honoured last week at the Mayor’s Reception.

Six Melksham Civic Awards were presented by Mayor of Melksham, cllr Adrienne Westbrook, to individuals and groups who have made a ‘significant contribution to the local community during the previous year.’

Five Community Service Awards were given to: • Anne-Marie Bartells for her work for the Party in the Park and River Mead School; • John Crook for his work with a number of local organisations and charities; • local band Female of the Species for their fundraising; • Melksham Music and Drama were recognised for 50 years of entertaining the town; • and Graham and Jenny Butcher were honoured for their volunteer work with the Bowerhill Residents’ Action Group.

An Achievement Award was also presented to local group, parkrun.

About the award winners, cllr Westbrook told Melksham News, “It is always an honour to present awards to Melksham volunteers. Our town is rightly proud of the effort so many put in to make a difference. Let us cherish those who work so hard for others. Well done to      everyone.”

Full details are on page 23.

Anne-Marie Bartells received her award for her involvement with Party in the Park and River Mead School. Her nomination said, “Anne-Marie has worked with Party in the Park for around 10-15 years. Her enthusiasm encourages others to join the team. She has also been a volunteer at River Mead School for a number of years, giving her time and energy, whilst at the same time bringing up a family.”

John Crook received his award for his work with a number of local organisations and charities. His nomination said, “John has always been proud of his Melksham heritage and has worked tirelessly to make sure that Melksham residents are well represented. John retired as Town Clerk nine years ago. However, this was not the end of his commitment to helping Melksham residents.

“He was treasurer of Melksham Town Football Club for many years. He also chaired Melksham Link for many years and was instrumental in bringing more volunteer drivers into this organisation.

“He has also been chair of Melksham Charities for around five years, making sure that the trust fund is used for the charitable purposes that it was set up for.

Local band Female of the Species were recognised for their fundraising. Their nomination said, “Female of the Species are five female singers who all front their own bands locally. Each year they get together as Female of the Species to put on a concert in the Assembly Hall, with all proceeds going to local charities. In previous years they have raised funds for Melksham MIND and Wiltshire Air Ambulance (air base appeal).

“Last year the group raised £3,000 for Young Melksham to help improve facilities at Canberra Youth Centre for the young people of Melksham.”

“Over the years, hundreds of artists, young and old have played their parts in this group and given freely of their time and energy to entertain us all.”

Graham and Jenny Butcher were honoured for their volunteer work with the Bowerhill Residents’ Action Group (BRAG). Their nomination said, “Graham and Jenny have been instrumental in ensuring Bowerhill and indeed Melksham is such a terrific place to live. They began their voluntary work with BRAG. Whether it is organised litter picks or helping the less fortunate or elderly residents, they lead from the front and always have done.

“Their volunteer work ethic is truly inspirational. They genuinely care for their community and prove that every day through their actions. On behalf of all residents, thank you!”

Volunteer group parkrun was recognised for its organisation of  free weekly 5k run held every Saturday at 9am in King George V playing field. Their nomination said, “parkrun has just celebrated its first birthday. The organisers and volunteers of this free event have created a safe and excellent environment for runners and walkers of all abilities and ages to help their physical and mental wellbeing.

“They are a fantastic group of people who volunteer their time and help the community of Melksham to come together once a week and support and encourage everyone who takes part.

“It has resulted in a community spirit very seldom seen and the only reward these people get is the satisfaction of seeing the progress of those taking part, each little milestone and each journey of success. They really deserve an award.”

Also at the reception last week, Poppy Fullock from Melksham’s Air Cadets – 2385 (Melksham) Squadron – was named as the mayor’s cadet. Poppy will assist the mayor at civic functions for the forthcoming year.