What goes up, must come down…and go back up again! Nicki’s skydive and wing walk 70th birthday thriller 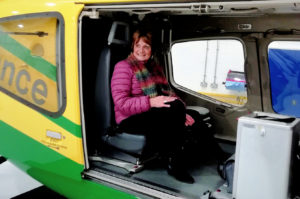 LOCAL woman, Nicki Morton-Holmes, has chosen a rather unconventional way to celebrate her 70th birthday – a skydive and a wing walk!

Nicki, who turned 70 in February, is raising money for the Wiltshire Air Ambulance and has set herself a target of £1,000 after already smashing her initial £500 target.

She will first take part in a skydive next week, on Sunday 21st April, and then four weeks later, on Saturday 18th May, she will take to the skies again, this time standing strapped to the top of a plane for a wing walk.

“I am so excited, it’s a dream come true, another two things ticked off the ‘bucket list,’” Nicki told Melksham News. “They are both challenges that I have always wanted to do. The skydive was a birthday present from my children Lee and Kim – I was thrilled when I opened the card.”

The offer to take part in the wing walk came direct from Wiltshire Air Ambulance after Nicki told them about her ambitions when she contacted them for a t-shirt to wear for her skydive.

“They are a fantastic charity,” said Nicki. “You can’t beat them – we have to support them, what would we do without them?”

“I have no nerves at all! I just hope I can raise as much as I can for the air ambulance. But my husband Brian can’t decide if I am brave or daft!”

To support Nicki, visit her fundraising page at: www.justgiving.com/fundraising/nickis-jump