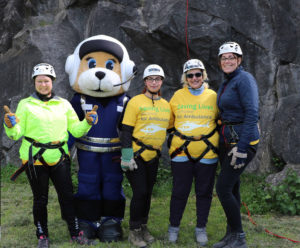 SUPPORTERS of Wiltshire Air Ambulance experienced the exhilaration of abseiling down Avon Gorge, Bristol, on Sunday 14th April including four women from Melksham.

Thirty people abseiled 200 feet down the gorge in Wiltshire Air Ambulance’s first abseil and their fundraising efforts will enable the charity to continue saving lives.

The team of abseilers were cheered on by Wiltshire Air Ambulance volunteers and Marsha the mascot. So far, over £3,700 has been raised.

Lisa Jenkins, who is also Asda Melksham’s community champion,  completed the abseil and said,“I did an abseil 20 years ago when I was in the Guides. I wanted to do this abseil to challenge myself and do something out of my comfort zone. I’m really glad I did it and I have raised more than £500 for Wiltshire Air Ambulance.”

Debbie Vines from Melksham said, “I thought it would be more scary but I didn’t build it up in my head, maybe just brave on the day. I said to myself just believe in the rope!

“I quite enjoyed it after the initial going over the edge bit. On the first descent, negotiating protruding sections of rock, I lost my footing twice and swayed, but soon got control back and continued – that was testing!

“I went down the second course and even did four Bear Grylls’ style leaps/bounces! I would have gone a bit higher – confidence!

“I’m really pleased I did it, challenge yourself and show others you can deal with it! I raised £195 for WAA.  I would recommend others give it a go. Thank you to all who supported me and you can still donate https://www.justgiving.com/debbievines.”

Mother and daughter, Julie and Alice Cannings from Melksham, also tackled the gorge.

Julie said, “The climb up was hard but beginning the descent was harder. I’m happy that I’ve done it, I have fulfilled my dream – but I won’t be doing it again anytime soon!”

Alice said, “The initial walk up leading to the top was building up nerves, once attached up and being spoken through what I was doing was also nerve racking.

“I abseiled twice, the first time was the hardest, I was tense the whole way down but when I went down for the second time, I enjoyed it a lot more, took in the wonderful view of Clifton Suspension Bridge. I’m so glad I was able to experience this. Together we have raised over £300, with more sponsors to come in.”

Kenresa Stratford, events co-ordinator at Wiltshire Air Ambulance said, “We are delighted at the success of our abseil at Avon Gorge. Thank you to Jake and the team at JT Expeditions for guiding our abseilers down safely and making the event memorable.

“It is the first time we have held an abseil and our participants embraced the challenge. Their fantastic efforts will help us to continue saving lives.”