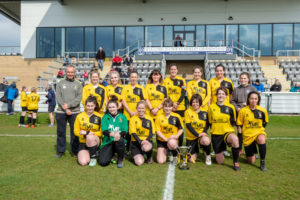 MELKSHAM Town Ladies have been crowned champions of the Wiltshire County Women’s & Girls’ League  Division 1. They were named champions after winning 12 of their 14 games, drawing 1 and losing just 1,  ending the season on 37 points.

Manager John Mackelden said, “I am proud of all the players that have turned out for Melksham Town Ladies this season and they deserve to celebrate their exceptional league win. After a summer where we saw a few established players move to other teams and a significant influx from our own U-17 squad, we went into the season not really knowing how we would fair against some of the stronger teams in the league.

“To end the season only dropping five points (1 draw at home, and a loss to Salisbury away) shows our remarkable consistency and a goal difference of +49 over 14 games is indicative of the attacking football we have played.

“We have also faced challenges this season; recently struggling for a keeper due to an injury (if any Ladies’ keepers would like to get in touch, we would love to hear from you) but even on the more challenging days, the morale has remained good and we have kept our focus.

“We also appreciate the support from our club; this season we have played four home league games on the main INFiLED stadium pitch, something that really motivates the players and the supporters (as the latter can sit in the bar and watch the game). It’s a fantastic team and I am very proud to be their manager, and delighted with this success.”

Their final match of the season, to secure the league title, turned in to an exhibition match at Oakfields as competitors, Lavington, were unable to field a side.

With Melksham Town Ladies lending a few of their players, they used it as a celebration match – the trophy already being there, waiting for the presentation.

Shannon Davis, vice-captain said, “From being at Melksham Town since I was eight, I’ve had many ups and downs.  But, seeing such a young and new squad battle their way through the league and become champions felt amazing!

“We had quite a lot of new and young girls join us at the start of the season, but hard work and commitment just shone through! I am one proud vice-captain for our team and proud to be part of Melksham Town Football Club.”