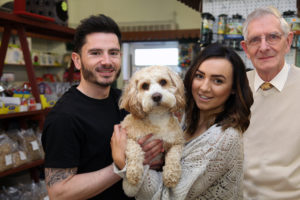 The Melksham News ‘Cutest Pet’ competition has been won by Reggie, a 23-month old Cavapoo dog – who could also be the town’s bravest pet, after battling his way back to health following an accident last year.

Hundreds of votes were received in the special competition organised to celebrate National Pet Month, which aims to raise awareness of responsible pet ownership and encourage fundraising for the nation’s needy pets.

87 pets in Melksham battled it out to be crowned the ‘cutest’ but it was half Cavalier King Charles spaniel, half Poodle, Reggie, owned by couple Shaun Heathcote and Lola Brain, who stole the hearts of Melksham News readers.

“I’m a proud mum,” said Lola who works at Regency Dental Practice, Spa Road. “Shaun and I are very happy for him. We shall treat him like a king – we are very proud owners. He is such a loved dog, Shaun takes him to work every day at his shop, Union Street Barbers, so a lot of people know Reggie, everyone will be really happy for him.”

As well as coming out on top as Melksham’s cutest pet, Reggie has also recently proved that he is also in the running as Melksham’s bravest pet. “In October last year he was hit by a car and had to have an operation,” explained Lola. “He now has a metal left hip and a really big scar, but it is healing well – it just goes to show that he is still cute despite all of this!”

For winning, Reggie and his owners were presented with a voucher to spend at Petstown, Bath Road, who sponsored the competition.

Owner of Petstown Barry Franks said, “This has been a fantastic way to celebrate National Pet Month – the Melksham community clearly loves their pets. It’s been a pleasure to sponsor the competition again, the response has been fantastic.

“Reggie is a worthy winner – not only is he loved by his owners Shaun and Lola, but, it seems by the Melksham public too!”