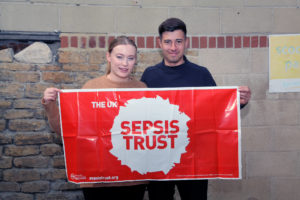 LOCAL couple, Estelle Edney and Mel King, will cycle from London to Paris later this year to raise money for charity in memory of Estelle’s brother, Keiran.

Keiran died from a rare form of sepsis in 2016 at the age of 21. The popular member of the community worked as a teaching assistant at Melksham Oak School and was also the coach for the under 16s team at Melksham Town Football Club.

The couple will cycle approximately 300 miles in September for The UK Sepsis Trust – the national charity that aims to raise awareness of sepsis; to train and educate health professionals about sepsis; and help families who have been affected.

Speaking about their upcoming challenge to Melksham News, Estelle said, “I’m excited and nervous! But I think it will be good, we want to do it well.”

Mel, added “It should be a good challenge, I think we will manage it comfortably. We went out on our first training ride last Sunday (14th April), a 30-mile cycle – it got the legs moving!”

In support of the couple, local businesses have been raising funds. Tops Hair Salon & Beauty, High Street, where Estelle’s sister Robyn works, held a bake sale and for Easter, staff made their own bonnets, asking customers to donate and vote for their favourite.

Estelle said, “A massive thank you to everyone at Tops for all their hard work.”

Also lending their support is the upcoming festival, Townfest 2019, which will be held next month at the Melksham Town Football Club on Saturday 4th May.

“A massive thank you to Townfest for donating some of the proceeds made to the UK Sepsis Trust,” said Estelle.

To support Estelle and Mel, visit: www.justgiving.com/fundraising/estelleandmel. Donations can also be made in person at Tops Hair Salon & Beauty, High Street; The Works Hair and Beauty, Bank Street; and The Fisheries, Union Street.