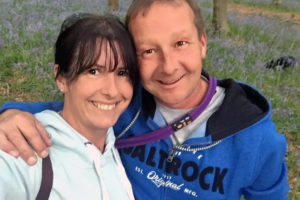 LOCAL woman, Karen Stovold, will be taking to the skies next month for a charity wing-walk, in memory of her partner, Stuart Neathey, who died last year at the age of 46.

Karen is raising money for the Wiltshire Air Ambulance, who attempted to save Stuart’s life in June last year, when he collapsed after having a heart attack.

“We met online in 2017,” explained Karen. “Stuart passed away on 11th June 2018 – we had eight wonderful months together. Everyone was so pleased that we had found each other as we had both been so unlucky previously.

“He was the man of my dreams, an amazing, beautiful, kind person, inside and out. We’d both finally found happiness, life was amazing and we both felt complete with an amazing future in front of us – but it was short-lived.

“He collapsed and died of a heart attack. The air ambulance team did their best to save him – they worked for two hours. But unfortunately Stuart was one of the unlucky ones. There were no warning signs – he was an active person – he was a keen golfer and he liked to play tennis. It was a complete shock.”

“I’m feeling very nervous, but excited for the wing-walk,” said Karen. “I have done a tandem skydive jump before, so this is not completely unfamiliar to me – but still, I’m nervous. Stuart’s probably saying, ‘Oh my days, what is she doing now?!’

“I want to thank Stuart’s family for their support – he has left behind two children; Meg, aged 19 and Alfie, aged 16 – they have become like an extended family to me.”