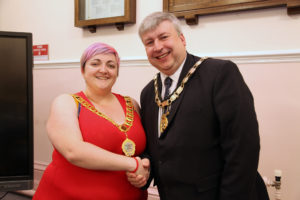 He was elected at last week’s annual council meeting along with deputy mayor, cllr Hayley Illman.

Speaking to Melksham News at the event, cllr Hubbard, who was previously deputy mayor said, “I am delighted to have the opportunity to represent the community and be the civic leader of our wonderful town. I look forward to meeting many of the groups, organisations and wonderful individuals that are doing fantastic things across Melksham over the next year.

“When I moved to Melksham 20 years ago, the thing that struck me was the incredible sense of community. If I could pick one ambition for my time as mayor, I would say that I would really love us to do more and more in Melksham to celebrate those individuals who bring so much to our town, be it through their work or through amazing teams of volunteers who do so much in our community.”

At the meeting, cllr Hubbard also expressed an aim to develop the town’s involvement in the age-friendly initiative; to see the council’s ambitions for a ‘Town Team’ to come to fruition; and to explore the possibility of adopting a ‘leader model’ at the town council – separating the role of town mayor from the role of leader of the council.

About her new role as deputy mayor, cllr Illman told Melksham News, “It’s exciting, it’s something different, it’s something to add to my list of things that I am doing for the town. I am looking forward to seeing what doors it opens up. I’ve been on the town council for four years, this is the next step in taking on additional responsibility.”

Speaking at the meeting outgoing mayor, cllr Adrienne Westbrook said, “It’s been a long hard two years.  I think two years ago we moved from a bit of a bumbling council – didn’t quite know what it was doing, where it was going – but in the two years gone by, I feel that I can say that we are heading in the right direction.”

“We have been through a period of considerable change – change not only because of the change of personnel in the council, but change because of the role and responsibility of this council in the community as we’ve seen more and more services delegated down to us and the expectation of us increase significantly.

“There’s also been change in the level of our budget, the number of people we employ, the services we have to deliver now – there is a dependency on us as a service provider that wasn’t there before.”

VOLUNTEERS for Melksham Community Support, who mobilised to help the local community during the Covid-19 pandemic, have been praised and thanked for their ongoing support.
View on Facebook
·Share

Be kind and stay hopeful, we will get through this together say town council
bit.ly/35TSeAn ... See MoreSee Less