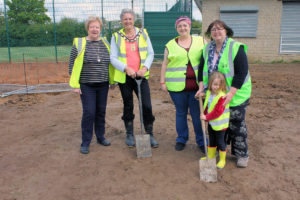 WORK has officially begun on the new splashpad for the King George V playing field.

The much-anticipated waterplay facility should be ready in time for the summer break this year. The splashpad is the new focal point of the facilities provided at the park and leads the way for the start of a much wider improvement programme. The start of the works was celebrated at a special ceremony this month, attended by the mayor, cllr Adrienne Westbrook.

“We are extremely proud to be bringing this facility to the people of Melksham,” said cllr Westbrook. “They deserve to have first rate facilities on their doorstep. We also very much hope that this will be something that will draw people to Melksham and once here, they will realise what a great town we have.”

Speaking to Melksham News at the event, cllr Westbrook added, “Sometimes I have to pinch myself to believe that it’s been achieved in this timescale, I almost couldn’t believe it was going to happen until the workers were on site. I can’t wait for July and for it to become a thriving hub of activity.

“Most people in Melksham are so excited for the opening, many have been going to Chippenham for their leisure activities, so it will be good to draw people back here.

“Melksham is a rapidly growing town and the 35,000 people in the town and its surrounding areas deserve something like this.

“As long as there remains decent weather all summer, it will be an enormous initial boost for the park, we want it to have the same sort of business that the pool used to have before it closed down in 2016.

“There is due to be more to go to public consultation in the next few weeks, we’re looking to develop a trim trail and a sensory garden for everyone to use in the playing field, and have been developing these plans with many groups who specialise in dealing with those who have specific sensory needs.

“It feels very poignant to have this as one of my final appointments as mayor, and I would like to give a huge thank you to the officers for delivering this and being able to make this possible.”

Included in the improvements for this summer, are the addition of a trim trail, the start of a community sensory garden, the addition of a new length of accessible pathway and improved access to the pavilion building which currently provide toilets for park users.

Proposals for future improvements include an all-new play area located next to the splashpad, an adventure area, café, sports area and a nature area; making King George V playing field a day out destination for families and older people alike.

Melksham Town Council is keen to acknowledge the funding they have received for the Splashpad from the European Agricultural Fund for Rural Development and local solar farm monies that has enabled them to deliver these exciting plans.

Community engagement officer Debbie Bentley said, “It is an exciting time for the people of Melksham and its council. To be able to come together to improve the facilities for the town doesn’t happen every day. I very much look forward to working with the wider community on not only the sensory garden, which launches at the end of May, but on all the remaining improvements”