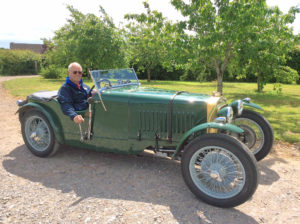 ATWORTH resident, Michael Gibbs, has embarked on an adventure to the Italian Alps in a classic car – a 1932 Frazer Nash ‘Exeter’.

For the sixth time, Michael is taking part in the ‘Raid to the Italian Alps’, driving across Europe to meet with 89 other Fraser Nash enthusiasts at Bolzano, a town in the north of Italy.

Michael is one of the original participants of the first ‘Raid to the Italian Alps’, which took place in 1969. The event takes place once every ten years.

Michael explains, “Frazer Nash Cars won the relentlessly tough International Alpine Trials three times in succession in 1932, 1933 and 1934. In the twenties and thirties, the 1.5 litre Frazer Nash sports car was the car of choice for sportsmen who wanted to win races, rallies and trials both in UK and overseas.

“Light and nimble and with a unique four-speed chain driven back axle, with no differential, and easily capable of 80 mph in standard form, it can still hold its own on B roads and race tracks against modern cars.

“These un-paralleled successes were commemorated with the first ‘Raid to the Italian Alps’ in 1969; and one every ten years since. The word ‘raid’ in English means a warlike foray, but in Italian the meaning is an historic journey.

“From 1969 the Frazer Nash Car Club adopted the use of the word ‘Raid’ to mean a serious but light hearted foray, which fully encapsulates these commemorative events; the participants being collectively known as ‘Raiders’ – and indeed, the collective name for vintage Frazer Nash owners is ‘The Chain Gang’.

“Thirty-five Chain-Gangers travelled across Europe in 1969 – probably the first of such large scale continental forays for one-make vintage cars. The numbers have increased each decade and this year, the 85th anniversary of the Alpine Trial successes, sees an entry of 90 Frazer Nashes – not bad as only 324 such cars were ever manufactured between 1924 and 1938.

“Collectively a 250,000 Frazer Nash miles will be notched up as most cars will be driven across, and back, through France, Germany, Austria and Switzerland.

“Starting from all over the UK the intrepid drivers will converge on the northern Italian town of Bolzano which sits conveniently in the rugged, rose-tinted granite mountain region known as the South Tyrol and the Dolomites.

“There several ‘trials’ or mountain days will see 200 mile ‘laps’ of these beautiful and dramatic mountain routes, with numerous tortuous passes at altitudes ranging as high as 9,800 feet. The club will also take part against the Bolzano Vintage Car Team in regularity hill-climb and driving tests. After nine days in Bolzano, the Raiders will return to the UK.”

Michael set off on the adventure on Wednesday 5th June, driving in convoy with his friends Chris and Felice Chilcott, from Aberdeen. They are due to return the evening of Wednesday 19th June.

Next year will mark Michael’s 60th anniversary of ownership of his 1932 Frazer Nash ‘Exeter,’ having purchased it as a teenager in May 1960. “I’m perhaps one of the longest single ownerships in UK,” says Mike.