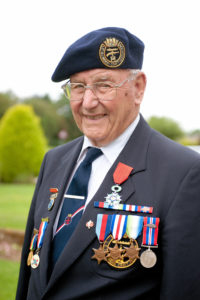 LOCAL D-Day hero, Frank Diffell, has travelled to France to take part in a memorial service to mark the 75th anniversary of the world-changing battle.

94-year old Frank, pictured right, who lives in Whitley, is a Royal Navy landing craft veteran and was on the crew of an allied assault landing craft in the first wave at Omaha Beach on 6th June 1944 and faced intense fire from German troops. Omaha was the most heavily defended of the D-Day beaches and casualties were higher than on any other beach.

During a previous visit to France in 2016, Frank was presented with the Legion d’Honneur for his bravery on that day. It is France’s highest honour, which is usually reserved only for French nationals.

Events are being held in the UK and France this week to commemorate the D-Day anniversary. Frank’s visit to France has been organised by D-Day Revisited, a charity that runs pilgrimages each year, giving veterans the opportunity to remember their fallen comrades.

Prior to taking part in a 2016 pilgrimage for the 72nd anniversary, Frank met with HRH Prince Harry in Portsmouth. Speaking at the time, Frank said, “At Southwick House in Portsmouth, where General Eisenhower planned D-Day, I was able to tell Prince Harry that from my landing craft I helped land US troops on Omaha Beach under intense fire on D-Day and in the following days.”

By an extraordinary coincidence, during the ceremony Frank met US Army Omaha Beach veteran, Bert Chandler, who he discovered had been on the same ship as himself during the landings. He’s hoping to meet up with Bert again this week.

To commemorate his part in the D-Day landings, Frank has built a model replica of the landing craft used at Omaha Beach. Until recently, the model was on display at the Manor Farm Country Museum, near Southampton. See picture on page 22.