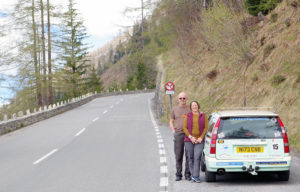 A MELKSHAM couple have completed the challenge of a lifetime, travelling 4,500 miles from Edinburgh to Rome, via the Austrian Alps, in a rusty old car.

The couple completed the 14-day rally through Europe in a car that cost no more than £500 to purchase and to prepare – a Volvo 850 Estate.

“It was a fantastic experience,” said Richard speaking to Melksham News. “We had some mechanical issues along the way, but we made it back to the UK with the car still going strong! 19 cars started the trip in Edinburgh, 15 cars made it back.

“However, it was almost touch and go whether we would start the rally at all – on the way to the start in Edinburgh one of the five cylinders went, which meant we were only firing on four. The morning of the rally we went to a scrapyard in Edinburgh and found a similar replacement from a Saab car.

“Driving through the Austrian Alps was impressive – the roads were very steep and at one point we had to wait for ploughs to clear snow from the roads – it all made for an entertaining adventure.

“Another highlight was driving down through the Dolomites – a mountain range in northeastern Italy – that was just superb. After some long days and long drives we finally reached Rome, where we stayed for two nights before heading back. We are thinking about taking part in a different challenge next year, and maybe we’ll use the same car!”

Donations can still be made to the Guide Dogs for the Blind Association via Richard and Caroline’s fundraising page: www.justgiving.com/fund raising/richard-aylward1