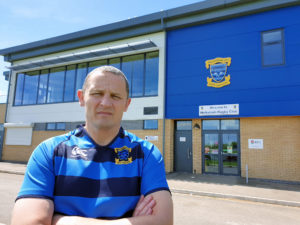 TV personality and professional coach, Chris Chudleigh, has been named as Melksham RFC’s new coach for the upcoming seasons. He has had experience at Premiership team Sale Sharks, worldwide coaching and  head coach on the Sky Sports TV show ‘School of Hard Knocks’.

Chris said, “I am excited to be working with the team at Melksham RFC. There is a big pool of players that are keen to improve and that’s all a coach could ask for. As long as players want to improve, get better and want to listen, then we will achieve great things.

“The club already has a great set-up and ambition; it’s my role to make it an even better club all round, from juniors all the way to seniors.

“I really haven’t been this excited about a coaching role in a very long time. I am hoping that I can fulfil the potential of each individual in the squad and develop their own skills. My background is all about bringing the best out of people.

“It’s not too big of a challenge either, the club is already in a good state but it’s about making what exists better, raising the standard across the board. Hopefully all will fit into place.”

A serving soldier, Chris joined the Royal Regiment of Wales at the age of 20. He continued playing rugby for the army, playing for local clubs wherever he was posted including Leeds, city of Derry in Ireland and Blackwood in Wales.

Following a bad injury at the age of 27, leading to his retirement at the age of 29, Chris turned to coaching, starting up his own professional coaching business.

Leaving the army in 2007, he then went on to coach numerous teams across the world including working with premiership club Sale Sharks, helping to coach players who were on the brink of turning professional. He worked with exchange players from South Africa. He has also trained teams in America, Spain and Latvia and was the director of rugby at Liverpool university.

He was also head coach on the TV show ‘School of Hard Knocks’ with Scott Quinnell (52 caps for Wales) and Will Greenwood (World Cup winner with England in 2003). Together they took people who have a violent past, struggling with education or unable to get work, and through rugby taught  them discipline to help them find work or reengage with education after the programme.

They taught people from the age of 14-48 all over the country, including street gangs and in prisons.

He said, “It was a really rewarding experience. Rugby is a vehicle and really helped these guys. The sport is scary, you have to rely on your mates, it’s a challenge.

“Most people shy away because they think it’s dangerous but it’s a physical confrontation in a controlled environment, which helped these guys learn aspect of discipline.”

Three years ago, Chris rejoined the army – working again with the army rugby team. The opportunity then arose for him to become the new coach at Melksham RFC.

Chris continued, “Pre-season starts Monday 17th June where the whole club, teenagers, men and women will all be training together on a Monday and Thursday from 7pm. My aim is to make training fun, I could get every player to condition themselves by running around a track but A, that’s not fun and B, it won’t teach them how to pass a ball or tackle.

“The summer will also feature mini and junior festivals that you are all welcome to come along to and I will also be working with the junior coaches and look to improve the standard of coaching across the board.”