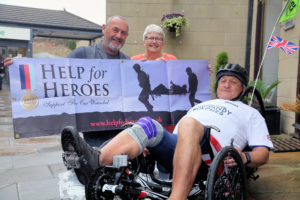 MELKSHAM veteran, John Marable, will embark on a 350-mile cycle ride in France this week to raise money for the charity Help for Heroes and to commemorate the 75th anniversary of the D-Day landings.

In a show of support for John and to mark the milestone anniversary of D-Day,  which takes place on Thursday 6th June, local veterans, groups and businesses have joined forces with John and Andy York Photography in the Littlebrook Courtyard to create a commemorative window display.

Beginning this Sunday 9th June, John, a retired army sergeant, will join the ‘Big Battlefield Bike Ride – Normandy Beaches’ to cycle across Northern France over five days in a recumbent bicycle – a bicycle that places the rider in a laid-back reclining position – taking in some of history’s most iconic battle-sites along the way.

Money raised will go to the national charity, Help for Heroes, which provides lifelong support to service personnel and military veterans with injuries, illnesses and wounds sustained while serving in the British Armed Forces.

John has been taking part in charity cycle rides since 2010 and has raised over £40,000 in total for Help for Heroes. “During this ride I will clock up my 4,500th charity cycling mile,” he said. “It feels great to reach such a big milestone – but the next one is going to be 5,000 miles, so I will have to take part in the challenge next year!

“On this ride there will certainly be thoughts for those soldiers that have gone before us. We will be paying our respects to all fallen soliders at cemeteries along the way – honouring soldiers of all nationalities, whichever side they were on.”

The commemorative window display at Andy York Photography to mark the 75th anniversary of D-Day, features photos of local veterans Allan Gullis from Melksham and Walter ‘Wally’ Beall from Atworth, who both served in the 1944 Normandy invasion. Also featured is artwork by Andy York, photos of Normandy, and military memorabilia from the era.

Speaking to Melksham News, owners of the photography shop, Andy and Christine York said, “This is an event that changed the world, and it should not be forgotten what people gave to achieve this. Lots of people remember to commemorate VE Day, and this anniversary is just as important – the sacrifices made were just as great.

“We would like to thank everyone who contributed to the display, or gave their time to help. Thanks goes to ‘Capitan Mainwaring and the 1940s Buddies’, Neil Okatan from the Pig and Whistle pub, Blitz & Bobs Military Emporium, Tony Fidele, and AL King Roofing.”

The D-Day window display at Andy York Photography will be available to view until Monday 17th June – donations to Help for Heroes can be made in-store.

Donations can also be made via John’s fundraising page: www.justgiving.com/fundraising/john-marable5