Splashpad on course for summer opening 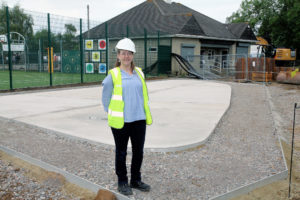 WORK to build the new splashpad for the King George V playing field is on schedule, to be completed in time for the summer holidays.

Work to build the much-anticipated waterplay facility outside the cricket pavilion began in early May. A new footpath connecting the splashpad to the pavilion and a new patio area outside the pavilion are also under construction.

Taking Melksham News on a tour of the site, the town council’s community engagement manager, Debbie Bentley said, “We are on schedule to have the splashpad open and ready for the summer holidays.

“The path and patio will also be completed at the same time. We won’t complete the full length of the pathway (connecting it to the existing path around the perimeter of the playing field) for the summer, but this will be done in September – and that’s a cost thing because we need to get a sub-contractor in.”

The splashpad is one of many improvements the town council is making to the park this summer. Other projects in development include the addition of a trim trail and the start of a community sensory garden.

Debbie said, The trim trail equipment – outdoor gym equipment – has been ordered and should be installed and available to use by the end of July.”

Proposals for future improvements include an all-new play area located next to the splashpad, an adventure area, café, sports area and a nature area.