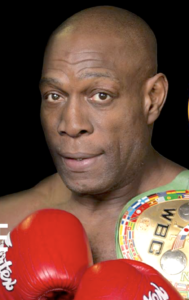 Frank will be interviewed live on stage by a special guest interviewer and he will answer questions about his battles both inside and outside of the ring.

Franklin Roy “Frank” Bruno, MBE is a British former professional boxer who competed from 1982 to 1996. Bruno had a highly publicised and extremely eventful career.

The pinnacle of his boxing career was winning the WBC heavyweight title, in what was his fourth world championship challenge.

He also held the European heavyweight title earlier in his career. Bruno was one of the most well-loved and recognisable boxers in British history, and faced multiple top-rated heavyweights during his career including two bouts with Mike Tyson and a domestic clash against Lennox Lewis.

He won the WBC title in 1995 after defeating Oliver McCall at a packed Wembley Stadium. Bruno was known for his excellent punching power: he won 40 of his 45 bouts and 38 by knockout, giving him a 95% knockout rate from the fights he won; his overall knockout percentage is 84.44%.

Like Henry Cooper before him, Bruno has remained a popular celebrity with the British public following his retirement from boxing.

Organisers say, “The evening at Melksham Assembly Hall has three ticket options. General admission is £24.95 which includes a guaranteed seat for the on-stage interview, a charity auction with profits going to Wiltshire Mind, a cash bar and merchandise stall.

“A gold ticket at £34.95 includes all the above as well as seating in the front six rows, a welcome drink, meet and greet with Frank after the show including a professional photograph.

“A platinum ticket for £59.95 includes all of the above plus seating in the front two rows ensuring the very best view, exclusive access to VIP area, just 40 tickets available, where you will mingle with Frank for 45 minutes before the event starts, enjoy two complimentary drinks, professional photo with Frank and an autographed souvenir photo.

“Professional photos are provided as a high-resolution digital download, these will be available within 48 hours of the event. You are free to print as many copies as you would like and use on social media.

“We will also allow one photo on your mobile phone, please have your phone ready. There will not be time for autographs, please do not bring anything for Frank to sign.”

Tickets are available now from httpwww.ticketsource.co.uk/booking/t-mknxkd or via the box office 0333 666 3366.

If you book 10 tickets, the organiser goes free, ideal if you run a club or for a large group of friends.