Melksham likes to party! Party in the Park brings in the crowds 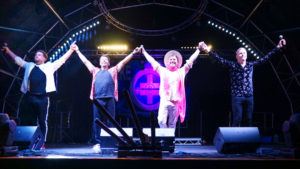 THOUSANDS of people flocked to King George V Park for the 20th Party in the Park weekend, despite the rain threatening the fun during Friday’s warm up show, Parkfest.

The sun shone on the Saturday for the Party in the Park, celebrating its 20th anniversary.

Other entertainment featured the Joseph Peace Fire Show, In2Dance, Phoenix Twirlstars and a spectacular fireworks display to end the evening.

Rain didn’t dampen the spirits of Melksham’s party go-ers on Friday 19th July as Parkfest brought live entertainment for the second year as a warm-up to the weekend’s main Party in the Park the following day. The theme of this year’s Parkfest was celebrating 40 years of ska and two-tone music inviting Train to Skaville and headline act The Neville Staple Band to the stage, as well as support from Funboy 2 – a DJ collective and live PA.

Committee member Bruce Burry said, “This year’s event went very well, we were really happy with how it went. We had issues with the weather on the Friday night but still people were coming through the gate and it eased off by the time the acts were on the stage.

“All throughout the weekend the bands were excellent. It is great to have so much local talent in and around Melksham, as well as welcoming our headline acts.

“The Saturday’s weather was great, the sun was shining and again everything went really well. Thousands of people enjoyed the entertainment and we want to thank everyone for coming.”

Chairman of Party in the Park, Mark Stansby said, “I must thank our main contractors for their professional work in making the weekend such a great success. Alex from Kanconnections, Paul from Light Fantastic, the team at Box Steam Brewery, Metropolis Security, St John Ambulance, Northern Lights fireworks team, FM Staging and our sound team from All The Kit.

“I must also thank our main sponsors for this year, both Melksham Town and Parish Councils, Carlsberg and Box Steam Brewery and to those businesses which contributed through various forms of advertising packages. Thanks also to Melksham Independent News for our coverage over the year and to Linda, our super photographer for the weekend!

“A huge thank you must also go out to our brilliant band of volunteers, including Westbury and Warminster ATC, all of whom put in many hours over the weekend, at times in very trying weather conditions.

“And a huge thank you to the Melksham Music Festival committee for their dedication and enthusiasm to produce such a great show. Enjoy your summer break team!

“And for next year?  You will have noticed that changes are taking place within the park and we will need to seek certain assurances from Melksham Town Council over the suitability of the venue for future Melksham Music Festival events to be held here.  We hope to return in 2020 and we will keep you posted on developments.”

One Response to Melksham likes to party! Party in the Park brings in the crowds