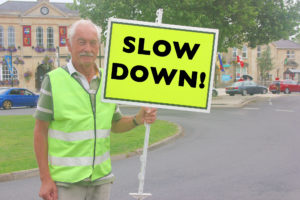 A CAMPAIGN has been launched to combat speeding and anti-social driving in Melksham’s town centre – with residents calling for a 20mph speed limit to be introduced.

The proposal for a 20mph limit by residents of the High Street and surrounding roads, has received the backing of Melksham’s mayor, cllr Jon Hubbard, and the Melksham Area Community Safety Group.

Residents say that they are being ‘pushed to their limits’ by cars speeding through the town in the evenings and at night; and they are also ‘fed up’ with excessive noise from ‘souped-up’ cars and motorbikes. In response to complaints, the Melksham Area Community Safety Group is launching a campaign to support residents to take action.

One resident of Spa Road, which connects to the Market Place, told Melksham News “A 20mph limit is a great idea. They drive like bats out of hell through the Market Place and then up Spa Road – some cars are clearly doing speeds around 60mph. It’s ridiculous!

“And then there’s the problem of the noise – some of these modified exhausts sound like Concorde taking off. And then there are those that like to ‘multiple backfire’ – this is anti-social. These people are ignorant and are just showing off – but for who?!”

A High Street resident added, “The noise at night from ‘souped-up’ exhausts and engines is unbearable. I’ve moved here from a busy part of London, and it was much quieter there! We can’t have our windows open at night, and if we do, we can’t hear the television, let alone hear ourselves think!

“And the speed at which some of these idiots drive  – it’s an accident waiting to happen.”

From the Melksham Area Community Safety Group, Colin Goodhind said, “The group wholeheartedly supports the suggestion that the town centre becomes a 20mph zone. Banning traffic from the town centre is unrealistic and economically unattractive, but a 20mph limit would make the situation more safe, bearable and introduce a better balance of use by vehicles and pedestrians. Both are equally important to our local economy.

“In response to numerous complaints and comments about anti-social driving and speeding in the town, the Melksham Area Community Safety Group is launching a campaign to address this. The aim of the campaign is to make it clear that people don’t have to put up with this in their town and to explain exactly what they can do to stop it.

“The group is working closely with the police to provide guidance on what details are required, along with what response can be realistically expected. Several fatalities over the last few years do not seem to have deterred speeding drivers and there has been a significant increase in noisy vehicles, particularly those with multiple or large exhaust pipes. These features alone don’t mean the driver is in any way inconsiderate, but the way the vehicle is driven makes all the difference.

“Intentional backfiring, or as in most cases poor maintenance, subject hundreds of us to unreasonable noise on a single journey and around the clock. You do not have to put up with this and we’ll be explaining how you can help put an end to it.”

Pledging his support to a 20mph speed limit, mayor cllr Hubbard said, “The town centre is crying out to be 20mph, and I would fully support any submission to do that. I think all residential areas should have a 20mph limit.

“In fact, as part of a town council ‘visioning’ exercise for the town centre, I will be pushing for the 20mph limit suggestion to be included. And I will suggest we look into what could be done to pedestrianise some of the town centre.”

About the idea of a 20mph speed limit in the town centre, a spokesperson for Wiltshire Council said, “Wiltshire Council has an adopted policy that sets out the criteria used to determine if a location is suitable for a 20mph restriction.

“Should the local community wish to see a 20mph restriction installed in the town centre, then they should in the first instance make representation to Melksham Town Council, who in turn would raise the matter with the Melksham Community Area Transport Group.

“Through this process an assessment can then be undertaken to establish if the criteria are met and funding made available for delivery. This process has been followed previously with the delivery of 20mph restrictions in the Kenilworth Gardens and Coronation Road areas of the town.”

However, there could be some relief for residents concerned with excessive noise from vehicles if Government testing of a new prototype noise camera is successful.

In June, the Government announced a seven-month trial of a prototype noise camera to help crackdown on vehicles which are breaking legal noise limits, and also help catch those who rev car or motorcycle engines beyond legal limits.

The government has commissioned the prototype noise camera to be tested at several locations. If the trials are successful, recommendations will be made to further develop the system across the UK.

For more information about the Melksham Area Community Safety Group’s campaign or to offer your support, email: melkshamcommunitysafety@gmail.com

One Response to 20mph limit for town centre? Campaign to tackle speeding and anti-social driving