A NEW bypass for the east of Melksham and around Beanace could be built, along with thousands of new houses. 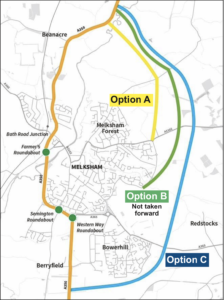 Plans for the bypass, submitted by Wiltshire Council to the Department for Transport (DfT), have revealed that Melksham could be in line for a new bypass together with an additional 2,045 homes as part of the new Wiltshire Local Plan.

Wiltshire Council, as part of a group of local transport authorities in the South West, has submitted an application for funding to the DfT for the new A350 bypass – one of seven major road network schemes proposed by the group.

A third route, ‘Option B’, was considered, connecting the A350 north of Beanacre with Eastern Way near to the entrance of the football and rugby club, but this has not been taken forward.

You can view a map of the proposed routes on page 21.

The proposed scheme is in its infancy, but if successful, construction could start in March 2024 – and depending on which route is selected, completion of the bypass is estimated to be March 2026 for the shorter bypass, and June 2028 for the longer bypass.

The submission to the DfT explains that the bypass would bring relief to the communities in Beanacre and northern Melksham from noise and air pollution, and high traffic volumes. According to the report, there is an average daily vehicle flow of between 30,000 to 40,000 vehicles on the Melksham section of the A350. It also says that the current A350 through Melksham has ‘insufficient capacity’ to cope with current and projected future traffic volumes.

Evidence used to support the bypass submission states that the bypass will help support housing growth along the whole of the A350 corridor in Wiltshire.

The bypass submission indicates that the ‘emerging’ Wiltshire Local Plan – which is expected to be confirmed next year – has earmarked Melksham for up to 2,045 new homes by 2036 – as part of the Chippenham Housing Market, which could have a target of up to 13,535 homes.

About the bypass plans, a Wiltshire Council spokesperson said, “At the end of July we submitted a Strategic Outline Business Case (made up of the original SOBC from Dec 2017 and an updated addendum) for a proposed A350 Melksham Bypass to the Department for Transport via the Western Gateway Sub-national Transport Body.

“Information on the STB’s submission including its Regional Evidence Base (REB) is available form here: www.gloucestershire.gov.uk/council-and-democracy/joint-ventures/western-gateway-sub-national-transport-body/

“Pages 181-184 in Part 3 of the REB includes outline information on the proposed A350 Melksham Bypass including a plan showing indicative routes – please note that as part of the SOBC, only Options A and C have been taken forward.

“In terms of a timeframe, this is very much dependent on if and when we hear on the success of the bid from the DfT. As part of the SOBC, however, we have provided a proposed timeline with the following key milestones: