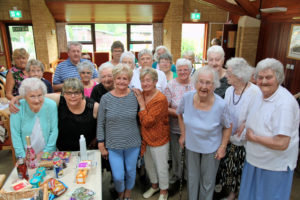 THE Good Neighbours Club, which announced last month that it would be disbanding at the end of August, has been thrown a potential lifeline.

The club, which currently meets at Rowley Place every Wednesday, has been offered a new meeting place at Blenheim House care home, Shurnhold, by events manager Chris Guest.

However, committee members have said that they intend to take a break from the club when it closes at Rowley Place at the end of the month, before making a decision about the potential move.

Secretary for The Good Neighbours Club, John Crook, told Melksham News, “Nick Galpin (the club’s facilitator) and I popped down to see Chris Guest this morning at Blenheim and were taken aback with his generous offer of free use of their facilities, which are very impressive.

“However we agreed that Nick would take the whole month of September to recharge his batteries and to give thought as to whether we might then be able to launch a smaller ‘Good Neighbours Mark 2.’”

Last month the club cited a number of reasons for its closure, including disagreements with Selwood Housing who manage Rowley Place and the communal space used by the club, and the resignations of a number of committee members.

Whilst they await news of the club’s future,  members, whose ages range up to 95, have expressed their sadness and disappointment about the club’s time coming to an end at Rowley Place.

Outgoing chair, Tanya Ward, told Melksham News, “We are devastated. A lot of people depend on this club – it makes them feel part of a community. I can’t put into words how I feel. All these people that come here, what else have they got? They have nowhere to go on a Wednesday.”

“This club is a lifeline to a lot of people,” said club member, Gill Carter.

Sisters, Lavinia Stainer and Edith Neale, whose brother Harold Hulbert once ran the club said, “We are very upset, lots of people here have been members for years. It’s so sad.”

“I’ve been coming for a year,” explained Geraldine Raisey. “This club means a lot to me – I can get out and meet people. For some people here, it’s their only day out during the week. I come here for company – I lost my daughter two years ago, for me this club is an outlet. Everyone is so friendly.”

In response to the reports of disagreements between club committee members and landlords Selwood Housing, a spokesperson from the social housing group told Melksham News in the last issue that the decision to disband the Good Neighbours Club had been taken by the club itself, not by Selwood Housing.

One Response to Good Neighbours Club saved from the axe?