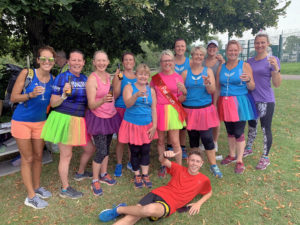 One runner even came all the way from Cape Town to take part, as well as 31 first timers and 53 runners achieving a personal best.

To celebrate her 50th parkrun, Kelly Davies was joined with her friends running the 5km circuit in tutus, enjoying a glass of bubbly at the end.

The parkrun Melksham team is looking for more people to sign up as a volunteer as without them, the event cannot go ahead.

Also, a reminder to runners that the parkrun has a planned cancellation on Saturday 31st August due to the River and Food festival.

There will also be a pacers week organised by Devizes Running Club on Saturday 14th September.