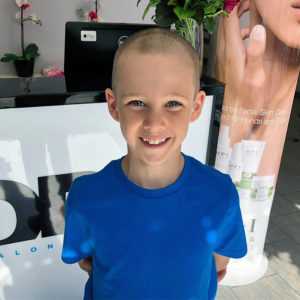 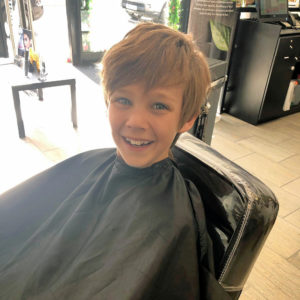 Theo, who is a pupil at Holt Primary School, visited Tops Hair Salon ready to brave the shave.

The idea came about for Theo to take on the challenge after he complained to his mother, Catherine, about the length of his hair.

“I jokingly said to Theo that he could shave his hair all off if he wanted to” said Catherine. “Then I told him he could do it for charity and Theo’s first reaction was that he thought it would be a really good thing to do.

“I was worried about telling my husband and tried to convince him that the decision had nothing to do with me, but he was also really supportive.

“Since that moment, which was about a month before the shave, Theo was determined to do it.

“I initially said that he could only go ahead with it if he raised a substantial amount of money. Our first target was £100. Then it soon became £200 and now we have raised £350.

“I am very proud of Theo and the staff at Tops were brilliant. We turned up for a normal appointment and then they found out Theo was doing it for charity, so they went round and made a collection for him and didn’t charge for the haircut. They were also especially kind with him.

“Holt Primary School this summer has also made a collection for the charity, as well as Firlawn Nursing Home in Holt, they have all been very supportive.

“He hasn’t stopped smiling since he had it done.”

Theo told Melksham News after his shave, ‘I thought it was a good thing to do, although my head is very cold!”

Vic Stevens at Tops Hair who cut Theo’s hair said, “When Theo came in for his appointment we soon found out that it was for charity. He told us how much he had raised and he was really chuffed and excited.

“They were such a lovely family, it was a pleasure to do it for him. We do a lot of charity head shaves here at Tops and we never charge them for it. It was lovely for them to choose us and it was great to be a part of it.”

If you would like to sponsor Theo, you can visit https://bravetheshave.mac millan.org.uk/shavers/theo-nash.