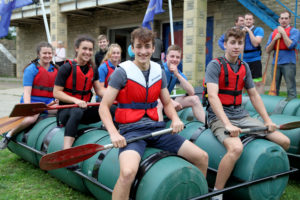 THIS year’s Melksham Food & River Festival has been hailed a huge success, with thousands of people descending on King George V playing field to enjoy a weekend packed full of activities, stalls and entertainment.

An estimated 8,000 visitors enjoyed attractions over the weekend which included a raft race; boat rides along the river; live music, belly-dancing, a fun fair; and over 70 food stalls offering food from all around the world.

“I actually can’t believe how well it went over the weekend,” said chair of the organising committee, Adrienne Westbrook, “it was totally amazing!

“I reckon there were about 5,000 people at the festival on Sunday, which was incredible; and about 3,000 people on the Saturday, which is still a good attendance.

“The stallholders were so happy – there was so much food to choose from, cuisine from all around the world – we were spoilt for choice! Every stallholder was delighted with how the weekend went, and many have expressed an interest in coming back next year.

“The cooking demonstrations were also stunning – one demonstrator commented that they had never been to a festival with such an amazing feel and relaxed vibe.

“The music was phenomenal from the likes of Burbank, The Decibelles, Macapello Choir and the Rock Choir – we had about 300 people stay on the Saturday for the evening concert, it was a great atmosphere. Also, the dancing by the rock ‘n’ rollers and belly dancers was absolutely ace. It really worked having the entertainment in the centre of the playing field, rather than hidden away on the balcony of the adventure centre.

“The team at the river were also very happy – there were loads of people in the river on Sunday trying their hand at canoeing. The zipwire was very popular and the boat trips were exceptional.

“Even the mini hurricane on the Saturday couldn’t dampen the spirits of everyone attending the festival. Thankfully, stallholders saw the funny side to it – even Jacqui and her homemade sweets, whose gazebo was wrecked by the winds and rain – she turned up the next day and was still her bubbly self. What was great to see was the number of people who ran to help Jacqui and the bodgers, who were also affected, in those two minutes of madness.

“Finally, a huge thank you to the sponsors – Melksham Town Council, the Asda Foundation, Leekes and Melksham Rotary. Between them they fund half the festival, so without them it would not be possible – their support keeps the festival free, and we want to keep it that way.

“And of course, a huge thank you to the volunteers. The festival is run totally by volunteers, and without this dedicated band of people, the festival just would not happen.”

One Response to ‘Amazing’ food and river festival delights thousands