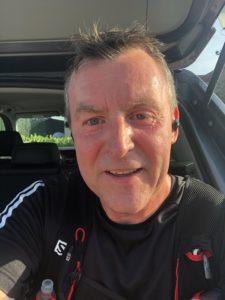 Melksham resident Darren Crook, is completing a ‘Run of Remembrance’ between local war memorials on Sunday 10th November to raise money for good causes while also raising awareness of the contribution made by Melksham during both World Wars.

A serving Royal Electrical and Mechanical Engineers soldier, with almost 33 years of service, Darren will be raising money for the Spirit of Normandy Trust and Melksham Remembers by running between the memorials of Beanacre, Whitley, Shaw, Atworth, Broughton Gifford, Semington, Seend and Melksham on the morning of Remembrance Sunday.

The route will cover a range of terrain and depending on weather and accessibility, will cover between 25 and 30km.

Darren says, “I have always been very proud of the community spirit in Melksham and the Melksham Remembers project epitomises that spirit; the group’s volunteers collected a tremendous amount of information above and beyond that displayed in the Town Hall in November 2018 and the money raised will enable their findings to be formally published and retained by the town.”

Regarding the Spirit of Normandy Trust, Darren was delighted to be invited to speak at one of their recent events on board HMS Victory, not least because of the Trust’s support to local Normandy veterans over the years. These include local man, Allan Gullis, who was Darren’s primary school bus driver during the 70s, Frank Giffell of Whitley and Wally Beall of Atworth.

Darren said, “The Trust provides welfare support to our veterans and a friend of mine, the Base Warrant Officer at RNAS Yeovilton, Baz Firth, recently accompanied Allan ‘Calvados’ Gullis to Normandy to mark the 75th Anniversary of D-Day, and it was very clear how much this meant to the veterans.

“Beyond this, the Trust also support a range of educational activities to ensure that the sacrifice of those involved in the Normandy Campaign is not forgotten: their work is deeply important to the legacy that is our freedom.”

Darren’s run will also be in memory of Trooper Charles David Townshend of the 4th County of London Yeomanry and Private Ernest William Missen MM of the 2nd Battalion The Wiltshire Regiment, who are both  remembered on the Melksham Memorial in Canon Square.

Darren said, “Ernest, who was awarded the Military Medal for his actions on the Somme in July 1916, was killed in action on the 9th April 1917 aged just 24 at Arras.

“Charles was killed in action shortly after D-Day on the 11th June 1944 aged 26 in Normandy: you’ll recognise that Charles was born as the First World War was coming to a close.

“Ernest was killed while assaulting the Hindenburg Line on Easter Monday 1917 and Charles, along with all the members of his crew, was killed in his Churchill tank following an engagement with German Tigers; both Ernest and Charles have no known grave but are routinely in my thoughts and both are remembered by the Melksham Remembers project.

“I was brought up to respect my grandfathers’ generation and recognise the dreadful sacrifice that was paid by so many for us to enjoy our freedom; the run gives me an opportunity to do that while raising money for two great causes and I’ve been humbled by the support from colleagues, friends and family from here and wider afield.

“Given the 75th Anniversary of D-Day has just passed, a target of £1,944 seems apt and perhaps we can raise even more; I’d be very grateful for any donations large or small.  Putting the price of a coffee or a pint of beer to this cause will be a small act that can make a very big difference.”

For more information about both the causes Darren is supporting visit: www.spiritofnormandy.org.uk and www.melkshamremembers.org.uk.