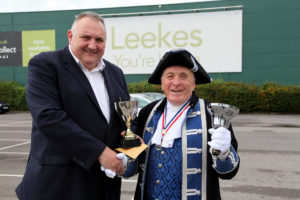 The event is part of Melksham’s Royal Charter Weekend, which will take place at the end of this month to commemorate the 800th anniversary of Melksham’s market charter.

From across Britain, 21 town criers will travel to Melksham to compete in the Market Place, making it one of the biggest competitions in the UK this year. The competition has received support from the town council and a number of local businesses, including Leekes, who last month met with Peter to donate £200 worth of vouchers to purchase prizes from the store.

Speaking to Melksham News, Peter said, “Big thanks to Leekes for their support, they have been very generous and are always willing to help events in the town. The prizes will be very well received – Leekes have done us proud.

“As this is the last championship that I will be organising, I wanted to create something special, and Leekes’ donation will help towards that.”

Leekes store manager Darren Clements added, “It is a pleasure to donate and sponsor the Melksham Town Criers Championship. We wish all the contestants good luck!”

Peter said, “All sponsors – Gompels, Cobblers Bench, Melksham Rotary and their Arthouse Cafè, and the Melksham Lions – have been tremendous, and the support from the 800th market charter anniversary committee has been most welcome. The main sponsors are the town council, who I am very grateful to.”

The special 800th anniversary celebrations will take place over three days from Friday 27th September through to Sunday 29th September – the town crier championship will be held on Saturday 28th September from 10am.