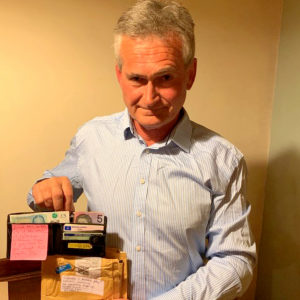 AN Australian man who lost his wallet whilst visiting Melksham, was shocked to return home Down Under to find that his wallet had beaten him back home, thanks to a good samaritan named ‘Pete’.

Richard Morris, who lives over 10,500 miles away in Smiths Gully, Australia, is appealing for information about who ‘Pete’ is, so he can thank him properly.

The only clue he has to the identity of ‘Pete’ is a short note that said, “Found this on the side of the road at Melksham, Wiltshire. Hope it gets back to you alright. Kind regards, Pete.”

Richard said, “I live in Australia but come to the UK frequently for work and to visit family in Wiltshire. Seven weeks ago I was sent to Melksham by my brother to buy some hardware fittings. Due to a misunderstanding generated by a predictive text my mission was unsuccessful and in the heat of the moment I managed to lose my wallet.

“The wallet contained cash, licences, credit cards – my whole identity. I set about retracing my steps throughout Melksham and visited the local police station in the hope it may have been handed in.

“The wallet remained lost and I began the arduous task of replacing the contents, mostly from Australia.

“Last night (Wednesday 11th September) I flew back into Melbourne and  collected my mail at our local post office. Lo and behold a package from Melksham had arrived containing my wallet with nothing missing!

“The package contained no return address, and no other details apart from a brief note from a man named Pete. It would be great to say thank you to Pete, so is it possible to find Pete? He is clearly a great credit to the town.”

If you know who ‘Pete’ is, or if you are the good samaritan Richard is looking for, email: richardcmorris@icloud.com