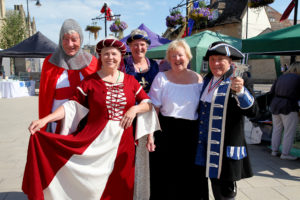 MELKSHAM will be transported back to medieval times this weekend for an ‘unforgettable’ three-day event to mark the 800th anniversary of the town’s market charter.

Celebrations will begin this Friday, 27th September,  with a visit from His Royal Highness the Duke of Gloucester, who will unveil a commemorative plaque outside the Town Hall.

Other celebrations taking place over the weekend will include the Melksham Town Criers’Championship in the Market Place; a medieval banquet at the Assembly Hall on Saturday 28th September; and a medieval tournament in King George V Playing Field on Sunday 29th September.

Volunteers behind the special events, say that it will ‘be a weekend to remember’, and ‘a once-in-a-lifetime chance’ for the community to celebrate such a milestone in the town’s history.

“There aren’t many towns that can boast an anniversary like this,” said volunteer Nick Westbrook, who will also be one of the hosts for the Duke of Gloucester’s visit.

“The aim of the weekend is to remind local people of this rapidly growing community of the historical significance of the town beyond its more recent industrial heritage, and to enhance the attractiveness of Melksham to encourage tourists and day visitors to the area.

“There are so many highlights, in fact they are all highlights! On Friday (27th September) we will be honoured with the Royal visit, which is a great start to the weekend of celebrations. It’s very exciting, and local schoolchildren have been busy preparing an exhibition of work for him to view at the Town Hall – this will be open to the public afterwards. The Duke will also have a chance to view the handmade historical banners and flags decorating the Market Place, which have been produced by local volunteers.

“Whilst the Duke is meeting local dignitaries inside the Town Hall, there will be a court jester in the Market Place to entertain the crowds.

“BBC Wiltshire radio will also be broadcasting live on the morning of the Duke’s visit – and they will return again on the Sunday (29th September) during the medieval tournament in King George V playing field.

“For the Saturday (28th September), town criers from across the country will come to the Market Place to compete in the Melksham Town Criers’ Championships. There will also be performances from Morris dancers and other performers.

“In the evening we have the medieval banquet at the Assembly Hall – unfortunately our caterers have had to pull out at short notice, but local volunteers and businesses have stepped in to provide a banquet that will be fit for a king!

“On Sunday afternoon (29th September) we have the medieval tournament in King George V playing field – there is so much going on! The Plantagenet Society will entertain you with combat reenactments. There will also be archery, squire training, apple pressing, a hog roast, courtly dancing, and travelling musicians. All there for you to enjoy – a free to attend event.

“This whole weekend has been organised by volunteers, so please come and join in with the celebrations – it will be a weekend to remember!”

These events have been organised to mark the 800th anniversary  of the award of a Royal Market Charter to Melksham by King Henry III in 1219. The charter granted Melksham permission to hold a weekly market and an annual Michaelmas Fair at the end of September and these permissions still exist today.

Tickets for the medieval banquet at the Assembly Hall cost £35, and are available from 01225 709887 or  online from  www.ticketsource.co.uk/bookings/t-mayppz