It’s ‘Pompeii or bust’ for chris and his banger car! 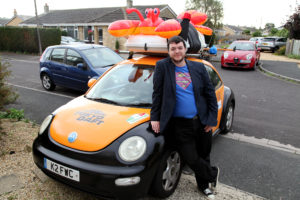 A MELKSHAM man is taking part in the ‘Banger Rally Challenge’, driving from St Austell, Cornwall, to Pompeii, Italy, and back again, in a car worth £200.

Chris Thomas, with his friends Richard Hill and Dan Eggle, will drive 3,000 miles over two weeks to raise money for Mind, the mental health charity.

The first leg of the journey took place last week, with Chris and his team arriving in Pompeii on Saturday 5th October. They are now currently attempting to drive the car back to their start point in Cornwall.

Speaking to Melksham News before he departed for the ‘Pompeii or Bust’ challenge, Chris said, “I am feeling nervously confident – I’ve been driving the car for about a month and it’s passed its MOT, which is great! But there’s definitely nerves about driving a £200 car through Europe and back, there’s a lot that could go wrong. And we don’t have breakdown cover, it’s too expensive, so it could be a long walk home!”

‘The Fast and the Furious: Tokyo Daft’ team have set themselves a fundraising target of £1,000 for Mind.

“Each one of us on the team have known someone with mental health challenges,” explained Chris. “Mental health is something that is not talked about enough – it has got better in recent years, but for some it is still seen as a taboo subject and people can often feel stigmatised. Talking about how you feel, to a good friend or a professional, about how you feel can really help. “Mind helps people in these situations, situations that will have touched each of our lives in some way.”

As part of the ‘Banger Rally Challenge,’  teams are set several challenges along the route. Chris explains, “We could be asked to take a picture of something or asked to find an obscure item along the way. And there will be ‘carpool karaoke’ – but I know that I can’t sing, so that won’t be enjoyable for anyone watching us on our Facebook page!”

To support Chris and his team mates and donate to Mind, visit: www.justgiving.com/fundraising/ tokyodaft