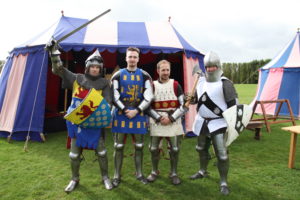 MELKSHAM’s medieval celebrations for the 800th anniversary of its market charter have been described as ‘magical,’ with hundreds enjoying a weekend packed full of merriment.

And praise has been heaped on the volunteers behind the weekend of events, which included a visit from the Duke of Gloucester, the Melksham Town Criers’ Championship, a medieval banquet at the Assembly Hall, and a medieval tournament in King George V Playing Field.

On behalf of the volunteers who organised the celebrations, Nick Westbrook said, “The whole weekend was a huge success! The feedback we have had from the participants who took part and the local people who attended has been very positive. The weekend was full of moments of magic. It really brought the town together, and it’s something that Melksham should look back on and be proud of.

“The celebrations have certainly raised the profile of Melksham – the coverage in the Melksham News and on BBC Wiltshire who broadcast live from the town on Friday and Sunday, will have done the town a whole lot of good.”

“Without the input of a team of dedicated volunteers, this weekend would not have happened. People went above and beyond what was expected of them to host these events. The town should be grateful that it has people like this in the community who are prepared to donate their time for the benefit of others.”

At the Melksham Town Criers’ Championship, hosted by Melksham’s own crier Peter Dauncey, 18 criers from across the UK competed in the Market Place with Andrew Fox from Ilminster, Somerset, coming out on top. Additional entertainment was provided by Chippenham Town Morris Dancers, Holt Morris Dancers and the Bells Angels from Holt.

“It went very well,” said Peter. “The day went like clockwork – everyone pulled together to deliver a fantastic day of entertainment. The Morris dancing groups were a nice touch to the day, and I was delighted with the results. I’ve had lots of kind comments from the visiting criers, they have all said how enjoyable the day was. I must thank everyone involved, including the judges and all the sponsors who made the championship possible.”

Diners at the medieval banquet in the Assembly Hall enjoyed a feast of medieval-themed food, and live entertainment from the Plantagenet Medieval Society, who wowed their audience with singing, dancing, poetry and armed combat displays.

“The atmosphere at the banquet was incredible,” said Nick. “There was so much food, more than what the ‘small’ stomachs of us 21st Century people could handle!”

“This was the best night out I have ever had in Melksham,” added local resident, Pauline Baker.

The finale to the celebrations was a medieval tournament held in the King George V playing field. Despite the rain, hundreds of visitors to the tournament enjoyed displays from Plantagenet Medieval Society, courtly dancing, squire training, apple pressing, and have-a-go archery.

Nick said, “One of my highlights was a young boy who had come to the tournament dressed as a knight – the look on his face when he saw the other knights in full armour was absolute magic. The Plantagenet Medieval Society were again fantastic, everyone said that they were absolutely phenomenal and exceeded all expectations.

“I think people were surprised by how committed they were to their performances – the battles were very intense, there were a lot of new dents in their armour! And the society themselves said how much they enjoyed themselves.

“There have already been suggestions that bring them back to Melksham!”