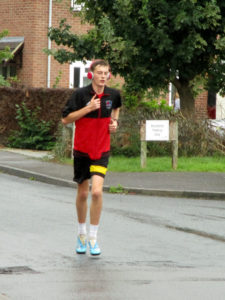 Edward, 16, decides on this challenge as 84 kilometres, the total run, is the distance from his house to the RNLI head office in Poole.

He has a keen interest in the sea and coastline, admiring the work of the 24-hour lifeboat search and rescue service.

He arranged the whole challenge himself, liaising with the RNLI, setting up fundraising pages and creating the daily routes.

Donna Hickman, Edward’s mother said, “Ed wanted to push himself and raise some money for a worthwhile cause at the same time. He isn’t a keen runner at all, in fact he suffered a serious knee problem four years ago, which could have ended his sporting activities.

“He played football for Melksham Town for seven years, but this was Ed’s first running challenge.

“Ed feels very proud, as are we, to have completed this challenge and has a real sense of achievement. He is also extremely grateful to those that supported him.”