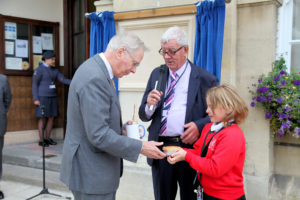 His Royal Highness the Duke of Gloucester was welcomed to Melksham last month by crowds of residents in the Market Place.

The Duke’s visit launched a weekend of celebrations to mark the 800th anniversary of the town’s royal market charter  granted by King Henry III in 1219. The medieval celebrations have been described as ‘magical,’ with hundreds enjoying a weekend packed full of merriment.

During his visit, the Duke met local dignitaries, town councillors and volunteers. He was also treated to an exhibition of work inspired by the 800th anniversary by pupils from three local primary schools, Aloeric, The Manor, and River Mead. The climax to his visit was the unveiling of a commemorative plaque on the exterior wall of the Town Hall in the Market Place.

Following the unveiling, year 6 pupil  Aeryn Giles from Aloeric Primary School, presented the Duke with a replica of the royal charter, a special 800th anniversary mug, a replica silver groat coin, and a plantagenet pie made by local butchers I D Newman & Son.

“I was very nervous,” Aeryn told Melksham News, “But afterwards I felt very proud and happy to represent my school.”

The Duke also took time to talk to the schoolchildren and local residents who had gathered in the Market Place to witness the historic visit.

Volunteer from the 800th Charter Celebrations group, Nick Westbrook, who was one of the hosts for the Duke’s visit, told Melksham News, “The Duke’s visit was exceptional. We were  so pleased that he took the time to talk to everyone, including the schoolchildren in the Town Hall, and the residents of Brookside care home, who are looked after by staff from the Orders of St John Care Trust, of which the Duke is connected to – he is the Grand Prior of the Venerable Order; one of the historic Orders of Chivalry that sponsors the trust.

“The Lord-Lieutenant’s office has been in touch to say how much His Royal Highness enjoyed his visit to Melksham.”