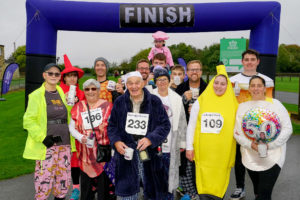 A MELKSHAM family recently completed a 5km fun run in memory of their family member, Darren Scott, who died two years ago.

The date of the fun run was especially poignant for the family as it would have been Darren’s 50th birthday. Before his death, Darren, who had motor neurone disease, was cared for by Dorothy House. So far, the family has raised over £170 for the local charity.

Darren’s sister-in-law, Cheryl Scott, who also ran the London Marathon this year in Darren’s memory, told Melksham News, “It was Darren’s wife Sarah’s idea to take part – we thought what better way to remember and celebrate his birthday, but also support Dorothy House, who were a great support.

“Even his granddaughter Arabella, who he never got to meet, took part and loved it. She had turned two on the 12th October (she was born the same year we lost Darren and a day before his birthday).

“The event was just such fun. We dressed up as  a ketchup bottle, bacon, egg, a banana, as Darren loved his bananas, and a beer, as on holidays he would have enjoyed a beer with his late breakfast. He would have thought we were completely mad, but proud of us too.”

To support the Scott family and donate to Dorothy House, visit: www.justgiving .com/fundraising/TheNutters Run. To find out more about Dorothy House visit: www.dorothyhouse.org.uk