Green for go at Farmers Roundabout 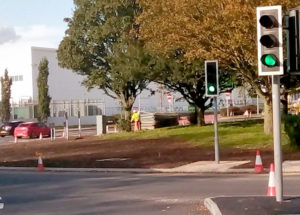 A major milestone has been reached on the Farmers Roundabout improvement scheme in Melksham, with the new traffic signals now activated.

The Wiltshire Council scheme, which began in February, has been carried out by contractors Dyer & Butler, and the lights being activated marks the beginning of the final phase of work. Engineers will be monitoring, testing and refining the traffic signals operation over the next few weeks, and the contractor and site-team will be focussing on the final few outstanding elements of work as the scheme moves towards conclusion.

As well as signals being installed at this key junction, the work has included resurfacing, line painting and widening of the highway infrastructure.

As areas of the site are completed, the temporary traffic management will be lifted and the new road layout will become fully accessible for road users.

Cllr Bridget Wayman, Wiltshire Council’s cabinet member for Highways said, “We have enjoyed a very positive collaboration with Dyer & Butler and I’m pleased work on this complex project is on schedule. I ask motorists to carefully familiarise themselves with the layout and signals and we appreciate everyone’s patience as they adjust to the new arrangements. Our team will be on site monitoring, to help keep traffic flowing as freely as possible.”

More information about the scheme can be found at www.wiltshire.gov.uk/high ways-improvements-a350-melksham