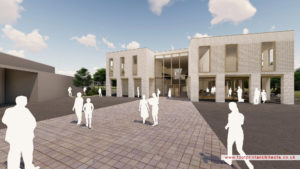 PLANNING permission has been granted for the expansion of Melksham Oak School.

The new building, which will be built on disused land on school grounds, will increase the school’s capacity from 1,260 to 1,500 students, aged 11 to 16.

The expansion of the town’s only secondary school has been proposed because of a growing primary school population and new housing being developed in the town. Estimated figures shared by the school show that by the 2020 school year, the school will be over capacity by 15 pupils, which will increase to an excess of 120 students in 2021.

However, the plans have attracted some criticism, with Melksham Town Council urging that a second secondary school be built to cope with the increasing demand. Whilst not objecting to the plans, they explained that they thought the expansion only deals with current pressures facing the school, not those the school and the town could be facing in the future

Wiltshire Council has said that the expansion will meet the needs of the Melksham community for ‘at least the next five to 10 years.’

Wiltshire Council has also received planning permission for an additional 100 sixth form places at Melksham Oak. This has been described as ‘phase 2’ of the plans for the school and the council is  currently seeking additional funding from the Department for Education.

The additional 240 places for students aged 11 to 16 years are being funded by Wiltshire Council with a combination of Section 106 contributions from housing developers and council funds.