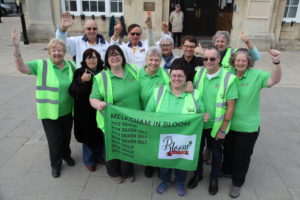 MELKSHAM has scored another Gold award in the South West in Bloom awards, making it three years in a row.

The news has delighted volunteers and the town council team who have spent countless hours smartening up buildings in the town centre, planting flowers and plants, and picking up litter.

Highlights this year included medieval flags in the Market Place, floral artwork on the former Tavern pub, a wildflower meadow with bug hotel on Bath Road, a new community garden behind the former spiritualist church on King Street, and a three-dimensional floral bee sculpture on the Market Place roundabout.

Chair of the South West in Bloom Melksham team, Kathy Iles told Melksham News, “It’s amazing! And fantastic to win the hat-trick of Golds! It’s also a relief, there was a lot of pressure on us to maintain the standard we had set ourselves and win the Gold again.

“Big thanks to everybody involved – all the litter pickers, painters, planters, weeders, and flag makers. Everybody worked so hard. The stunning floral bee and wildflowers on the Market Place roundabout were a stand-out highlight – the icing on the cake. Richard (Collett) did an amazing job.”

The ‘Bloom’ team have dedicated this year’s Gold award to former Melksham resident and regional secretary of South West in Bloom, Denise James, who died this month, shortly before the awards ceremony in Newquay.

Kathy said, “It was a very emotional day. Denise was diagnosed with terminal cancer three weeks ago – she passed away before the awards ceremony – we are all still in shock.

“Denise was a Melksham girl, and it was her idea in 2014 that the town should enter South West in Bloom. Melksham wouldn’t be winning all these awards if it wasn’t for Denise – so this win is for her. We are hoping to plant something in tribute to Denise in ‘The Friends Garden’ – possibly a magnolia tree, as she loved the one in the grounds of Melksham House.”

The awards ceremony also brought ‘blooming’ good news for the Melksham entrants in the ‘It’s Your Neighbourhood’ categories. The Conigre Mead Nature Area, Jo’s Upcycled Flower Garden at Waitrose, and Church Walk were all awarded with an ‘Outstanding’.

Bowerhill Residents Action Group (BRAG) also achieved an ‘Outstanding’ award for their picnic area, making it six years in a row for the team.

Forest & Sandridge Primary School, Shaw C of E Primary School, and ‘The Friends Garden’ – the project to create a new community space located behind the former spiritualist church on King Street, were all awarded with a ‘Thriving’.

‘Blooming Corner’ – the project to create a wildflower area with a bug hotel on Bath Road – was awarded an ‘Advancing’. Brookside Care Home and the Avon Bowls Club both walked away with a  Gold award at the ceremony for their entries in the ‘business, leisure and tourism’ category.

The Melksham ‘Bloom’ committee is now busy preparing for their 2020 entry, and are inviting the community to join them at their AGM to share their ideas for what next year’s theme could be.

“We need to up our game for next year if we want to win the Gold again and also win the Sargent Cup,” added Kathy.

“We had a nice feedback session with the judges after the awards ceremony, which gave us some tips for what we need to focus on – but other ideas for what we could do next year are welcome.

“We also need more volunteers, so if you don’t mind getting your hands dirty and being out in all weathers, then we would love to see you at the AGM  – you don’t have to be a gardener, people of all skill levels are welcome.”

The South West in Bloom Melksham AGM will be held on Tuesday 5th November at 7pm at the Town Hall.