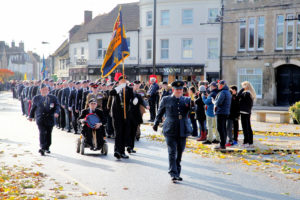 MELKSHAM’S support for the town’s annual Remembrance parade and service has been praised by the mayor, cllr Jon Hubbard.

Hundreds of people, young and old, turned out  on Sunday 10th November, to join people across the country in honouring those who have died and been wounded in past and current conflicts.

Speaking to Melksham News, cllr Hubbard said, “The thing that struck me most was the sheer number of Melksham residents who came out to pay their respects and to honour those who currently serve, or have previously served, and those that made that ultimate sacrifice.

“And again, I was touched, as with last year, that there were so many families there – it was people of all generations who were part of the commemorations. I thought it was a tremendous event and thank you to everybody who made it happen.”

The annual parade began at King Street car park shortly after 10.45am and marched through the town centre to St Michael and All Angels Church.

One of the oldest veterans taking part in the parade was 91-year old Elsie Spencer who served in the Women’s Royal Air Force (WRAF). Elsie was joined in the parade by her great-grandson, corporal Cameron Tate, who marched as a member of the Melksham air cadets, 2385 Squadron. Elsie’s daughter, Kathy Iles, and granddaughter, Hayley Illman, also took part in the Remembrance event in their roles as town councillors.

“That’s four generations of one family taking part today,” said Elsie. “I am also taking part in the parade in memory of my husband, Hal Spencer, who served in the RAF.  We met in Iraq at a dance, 60 miles from Baghdad. He was awarded a service medal for serving at Christmas Island, where they tested the atomic bomb.”

Following the parade a congregation of hundreds attended a service to remember those who have died and been injured in war, before wreaths of poppies were laid at the cenotaph in Canon Square by local groups and dignitaries.

For Remembrance Day  itself on Monday 11th November, a small service and two minutes’ silence was held at the War Memorial, Canon Square at 11am.