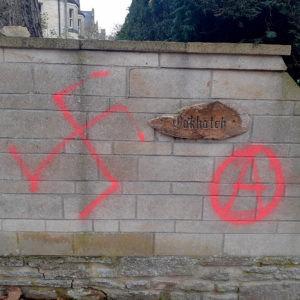 VANDALS have caused damage to several properties in the area in attacks that seem  linked to the upcoming General Election.

Last week, two properties – one on Bradford Road, Atworth, and the other on Spa Road – had white paint splashed across political signs in support of the Liberal Democrats and Labour Party. Damage was also caused to residents’ property and vehicles. And at an address on Place Road, which publically supported the Labour Party, vandals spray-painted a swastika – the emblem of the German Nazi party – and a anarchy symbol on a wall.

Atworth resident, Malcolm Jackson said, “I find it very disturbing having spent half my life in the British Army defending the right for such people to have free speech! I can’t begin to explain my disappointment with today’s attitudes. So very sad.”

The acts of vandalism have been criticised by the candidates running for election in the Chippenham constituency.

Labour candidate, Martha Anachury, told Melksham News, “I am shocked and appalled by the vandalism and the damage to a car and a property.

“I’ve seen posters being torn down in previous elections, but the damage to property goes way beyond that. I’m also appalled by the swastika sprayed on a wall, which is a hate crime, and the police must investigate.”

Liberal Democrat candidate, Helen Belcher, told Melksham News, “I was told yesterday (15th November) that three of my election stakeboards in and around Melksham had been defaced.

“I utterly condemn the behaviour of the vandals, who in two of yesterday’s cases also caused damage to property nearby. This vandalism is attempting to intimidate those who are legitimately expressing support for a mainstream political party with a real chance of winning this seat again. Such vandalism should stop immediately.

“I call on my fellow candidates in the Chippenham constituency to also condemn such behaviour and promise that their campaigns will not promote such vandalism.”

Conservative candidate, Michelle Donelan said online, “(It’s) dreadful – democracy only works when we respect opinions. Unfortunately I have already had a number of posters cut up and taken down.”

A Wiltshire Police spokesperson said, “We can confirm that we received a report that white paint had been thrown over a sign in a garden in Bradford Road, Atworth, which is believed to have occurred overnight on November 14/15. Anyone with information should call 101 and quote crime reference number 54190113449.

“Regarding the second incident, we had a report that paint had been thrown on a vehicle parked in a driveway in Spa Road, as well as the front window and wall of a house in Spa Road. This is believed to have taken place between 9pm and 10.45pm on November 14th. Anyone who witnessed the incident should call 101 and quote crime reference number 54190113387.”

Wiltshire Police were also approached for comment about the graffiti on Place Road, but they had not responded by the time of going to press.