To infinity and beyond! Local man’s High Altitude Balloon photographs Earth’s curvature from 18 miles up 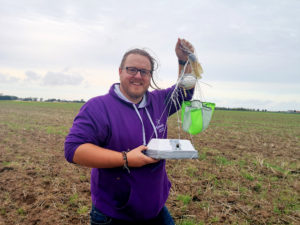 A MELKSHAM local has taken a photo of ‘near space’ using a homemade device he launched into the Earth’s stratosphere.

Using a high altitude balloon (HAB), which carried a payload with a camera and a tracker,  Aaron Regan’s device reached an altitude of 28.5km – nearly 18 miles high – over three times the height of Mount Everest.

“That is almost a third of the way to space,” explained Aaron. “The general consensus is that space begins at an altitude of 100km.

“I’ve always wanted to send something up into space and take a picture of the Earth’s curvature. Space and engineering has always been a fascination for me.

The launch, which was Aaron’s first, took place last month at a site in Ross-on-Wye. The HAB and payload travelled 130 miles across the country, before the payload landed near the River Nene in the east of England after the balloon popped.

“I was very proud and excited to see the pictures,” added Aaeron. “But it was an emotional rollercoaster beforehand – the tracker predicted that it would land in the water! The balloon is designed to pop – the payload has a parachute attached to it, to help it to return to Earth safely. Luckily I had attached the parachute in such a way that it didn’t open fully, slowing down its descent, which I think saved it.”

Aaron, who is a Broughton Gifford Explorer Scout leader, is already planning his next launch and this time he is hoping for some help from the Scouts. “My next project is to send a device into the stratosphere that floats around the world – circumnavigating the globe.

“The Scouts all seemed quite impressed with what I have achieved. I’m hoping this will inspire some of the group and maybe they will get involved in the project next year!”

Find out more about Aaron at:

4 Responses to To infinity and beyond! Local man’s High Altitude Balloon photographs Earth’s curvature from 18 miles up