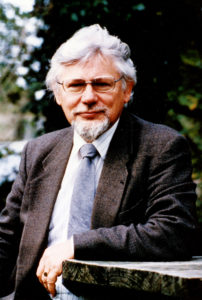 His obituary said, “Dr Roger Whatley was born on 19 January 1935 he was brought up in Southampton and moved to Melksham during the war.  Aged 9 he had jaundice and was visited by his GP Dr Schofield, who noticed Roger’s interest in books and reading.

“Dr Schofield invited Roger to visit his own home to read his books and Roger visited every Saturday.  Roger was encouraged by him to apply for scholarships and he was accepted by Dauntsey’s School.  He did so well at A-levels that he was awarded a state scholarship, at the time he wanted to be a biochemist.  But then his mother became very ill and he decided he would prefer to become a GP.

“He was called up for National Service in 1953 and joined the RAF as a nurse. He volunteered to go to Singapore and whilst there, decided to join a Buddhist Monastery for 2 weeks. He had a lifelong passion for Eastern art, medicine and religion. He liked unusual cars and with his demob money he bought a Messerschmitt (Bubble Car).

“He studied at Bristol University, where he met his wife Sheila and they married in 1961. They had four children, Martin, Matthew, Richard and Katharine.

“After 10 years in practice as a GP in Lambourne, Berkshire and Brownhills, Staffordshire, he moved to Melksham as a partner with Dr Walker in Place Road Melksham.  He and his wife set up the Lacock Practice at Cantax House in the 1980s and later established the Spa Surgery in Spa Road, Melksham taking on additional partners.  He enjoyed serving the patients of Melksham and Lacock and he retired in August 1991.

“During his retirement he obtained an MA in theology and was ordained as a priest in the Open Episcopal Church, becoming a Bishop in 2005. Roger had a wide variety of interests which also saw him gaining Dan grades and coaching awards in the martial arts of  Kendo and Iaido; keeping and flying birds of prey; and he was member of the British Society of Medical and Dental Hypnotists.

“He was a wonderful son, husband, father, grandfather, cousin and friend and is survived by his wife Sheila and his children.”

Dr Whatley’s funeral took place on 29th October and was attended by close family.  Donations in memory of Roger for the British Heart Foundation can be made care of DJ Bewley, 15 Bank Street, Melksham SN12 6LE telephone 01225 702521.