Doctor Who bow ties are made in Melksham! 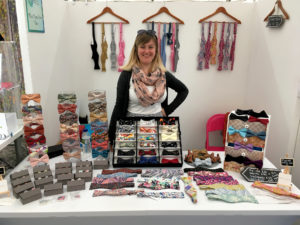 LOCAL small business owner, Helen King of Blue Eyes Bow Ties, celebrates as three of her bow ties have been chosen to feature on the new season of Doctor Who.

Helen runs Blue Eyes Bow Ties from her sewing room in Melksham. All of her bow ties are limited edition with only a few of each design ever made.

In 2017, Helen won the ‘Small Business Sunday’ award from Dragon’s Den star Theo Paphitis for her handmade bow tie business and since then she says it has  gone from strength to strength.

Helen said, “I was approached by a member of the BBC’s costume department back in January of this year. They bought three of the bow ties that you will see Jodie Whittaker, Doctor Who, wearing in the programme.

“You can see The Doctor wearing one of my designs in the promotional trailer. The new series airs in January.

“I was told to keep it a strict secret and didn’t say a word to anyone until they contacted me last week to let me know the bow tie had made the cut. It was such a long time ago, I actually thought nothing would come of it!

“I was obviously hugely excited to see one of my creations on TV.  Not only is it Doctor Who (one of the most famous bow tie wearers of all time) wearing my bow tie but also the fact that it’s a female Doctor.

“I’m a big fan of bow ties for both men and women but I know some people might find it a bit controversial. It’s sparked some debate online, but most people love the look and really appreciate that the Doctor is back in a bow tie again.

“I’m currently out of stock of the Doctor’s bow tie as I only made four originally, but I’ve managed to locate some of the fabric, so I’ll be making some more!”

One Response to Doctor Who bow ties are made in Melksham!