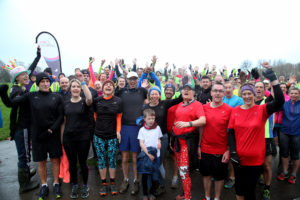 MELKSHAM parkrun had cause for two celebrations last month – its second anniversary and its 100th event!

The event has since grown in popularity – its current record is 300 runners at an event in March last year – and has been praised for its benefits to the community’s health and wellbeing.

And as of its 100th event, which took place on Saturday 14th December, Melksham parkrun has welcomed 3,215 different parkrunners, who between them have run the course a total of 16,859 times. The event has also been supported by a total of 448 different volunteers.

One of those volunteers, Heather Osak, who has volunteered for the event since it began two years ago, told Melksham News, “It is such a good community event – you get to know lots of new people, so if you are new to the area, people will chat to you. It’s for all ages, young and old. And it’s so good for people’s mental and physical health.

“I was quite overweight when I first started parkrun, and since then I’ve lost four stone – so my health has improved, and my friendship circle has grown – I just think it’s such a ‘smiley’ social event!

“I have friends who are struggling through illnesses, and they come and do parkrun. One friend has cancer, they can’t run every week because of their treatment, but they will still come for the social event afterwards – parkrun is so supportive.”

Volunteer Hayley Southgate, who was part of the team who campaigned and raised money to bring parkrun to Melksham, added, “Parkrun has been great for the town, and hopefully for the High Street. Everyone we speak to is just really positive about it.

“It is beneficial for people on weight loss journeys, and people living with mental health problems. We have one guy who hardly left his house, and now he’s very quietly and tentatively coming out to parkrun – which is great for him.

“It’s a win win for the town and for the people. But it can’t happen without the volunteers – the core volunteer team are here every Saturday morning from 7.30am setting up, come rain or shine. We can never have enough support.